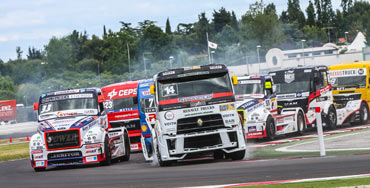 24. May 2015Misano - The sun came through on time for the start of the final race and the mercury actually cracked 20°. The heavens also smiled on polesitter José Rodrigues – at least to begin with. The Portuguese isn’t known to be the quickest starter, but this time he managed to make it to the first corner in front. Reinert, who’d started alongside, was savaged by the pursuing pack almost immediately. But for Rodrigues, the exhilaration of leading the field was over before the lap was complete. There was a crash right behind him — Körber and Reinert came together rather heavily; Reinert’s MAN landed in the gravel and Körber’s Iveco stalled crossways plumb in the middle of the track. While the rest picked their way past the two trucks in procession, the red flags were already out. The MAN managed to limp into the pits with severe impact injuries; the Iveco could not be driven at all and had to be towed off.
The restart took another half-hour, in the original grid formation — without Reinert and Körber.
Reinert’s MAN meanwhile had been sufficiently repaired in the intermission to allow him to chase after the field from the pit lane.
This time Rodrigues wasn’t as fortunate at the start. In the first corner he was passed by Vršecký, and then a little later by most of the rest.
The actual drama unfolded somewhat further down the field.
Sascha Lenz had made up a couple of places at the start and the German’s orange MAN was alongisde the Renault of Teodosio when the two trucks touched, spun, and skidded off the track. Teodosio thundered on oblivious and smashed into the MAN at full power, his Renault lifting several metres into the air over the rear of the hapless truck. Both trucks then came to a halt right in the runoff.
By now the excitement had drained out somehow.
Vršecký and Lacko were out in front, followed by Kiss, Albacete, and Hahn. Hahn appeared to be quicker than the Spaniard, but had to stay put in fifth despite several attempts at overtaking. Meanwhile the leading duo continued to stretch the gap over the rest. And should nothing untoward come to pass, the three Eastern Europeans would share the podium between them. The two Buggyras were trading places back and forth, and what everyone was waiting for was when Kiss would attack.
Having laboured in vain to overtake Albacete, it looked at long last like Hahn had reconciled himself to finishing fifth behind the Spaniard.
In the closing laps Kiss started asserting himself, weaving this way and that, but he just wasn’t getting anywhere. Instead, in the final lap, Lacko swept past his teammate for the final time to take the flag with a half-second advantage.
Vršecký adeptly contained Kiss, who in any case didn’t have to risk everything given his enormous lead in the championship — and the fact that Hahn was behind Albacete.
These five, the top finishers in every race so far this season, were followed by Janiec, Rodrigues, and Lohr.
Reinert, meanwhile had made giant strides to snatch the final point on offer from André Kursim, the young German having run in 10th for much of the race in his tankpool24 Mercedes.
Lacko now takes over second place in the championship standings with 155 points behind Kiss (209) but ahead of Hahn (147), Vršecký (121), Albacete (160), and Reinert (63).
Buggyra (Vršecký / Lacko) bested Oxxo-Lion (Kiss / Janiec) and Bernau-Albacete (Albacete / Lohr) for the team honours. 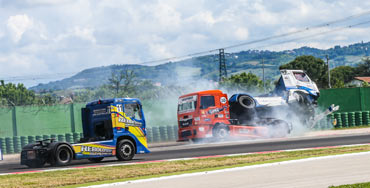 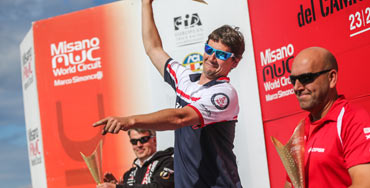