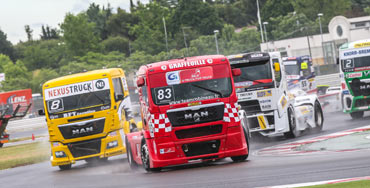 23. May 2015Misano - Interminable as parc fermé seemed after qualifying, the interval to the start of the second race was contrariwise incredibly brief, lasting no more than a few minutes. The Pit Lane Open signal set off another flurry of activity.
Robineau and Rodrigues were on the front row. The Portuguese fell back several places at the start itself and battled his way back into the points before he was forced to throw in the towel midway with a mechanical failure.
Polesitter Robineau fared somewhat better. For a while he held onto fourth after he’d given place to Janiec, Vršecký, and Kiss. But his rear was exposed to the ferocity of Lacko, Hahn, Albacete, and Körber, and the pressure was enormous.
The Frenchman eventually spun and the majority of the field swept past, but Körber’s Iveco collided with the MAN broadside, setting the German back in his pursuit.
Kiss meanwhile had been able to overtake Vršecký, and not long after even Lacko was past his Buggyra teammate.
The race was into its final third when first Kiss, and then Lacko, subdued race leader Janiec, thus deciding the podium.
The rest of the places were fought for tooth and nail. Hahn had decided he wasn’t satisfied with fifth, and mounted a volley of assaults on Vršecký with Albacete prowling in his shadow, but none of these three actually traded places either.
Körber was followed to the flag by Lohr, whose truck the Bernau crew, in a superhuman effort, had succeeded in restoring to race fitness after her accident in free practice earlier today. Rehfeld and Teodosio finished ninth and 10th.
Kursim missed out on his first point by a whisker, finishing 11th in the second tankpool24 Mercedes.
With 177 points Kiss has further extended his lead over Hahn (124), Lacko (123), Vršecký (100), Albacete (90), and Reinert (58).
Oxxo-Lion (Kiss / Janiec) was clearly the top team, ahead of Buggyra (Vršecký / Lacko) and Bernau-Albacete (Lohr / Albacete). 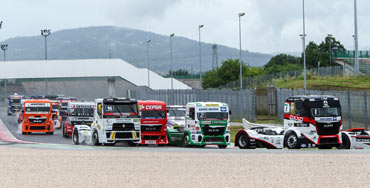 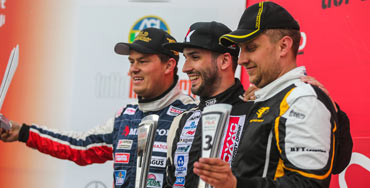