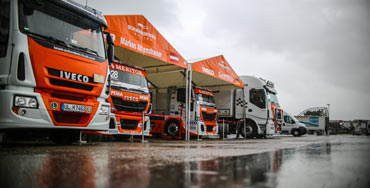 22. May 2015Misano - Since one in the night it’s been raining non-stop at the Misano World Circuit on Italy’s Adriatic coast. To call it rain is actually understating things — it’s pouring cataracts, and the strong wind lashing the circuit is blowing water in sheets across the paddock. Galoshes are among the accessories most in demand here at the moment.
If the Misano race weekend is among the most popular in the FIA ETRC, it’s been also because of the unmistakable holiday atmosphere and the lovely weather.
And till yesterday, it was as it’s always been. The teams that arrived early made the most of the “beach” weather. Others that dropped in at their workshops en route, or those that weren’t at Spielberg to begin with and only at the last minute made the trek across Austria, were caught by surprise, having to negotiate their ways around streets that had been closed off because of snowfall.
But every one of the registered race trucks has since reached the paddock, even the tankpool24 Mercedes of Roland Rehfeld. The man from Berlin had suffered engine damage in only the second race in Spielberg. His truck was taken apart on site in a combined effort using the Buggyra crane and transported to the workshop in Swabia and then on to Misano. The repaired unit was installed, and now not only Rehfeld and the tankpool24 team but also Mercedes Italy are hoping to heaven that both Mercedes race trucks survive the weekend unscathed.
Mercedes, you see, has set up a gigantic VIP tent and rented a large exhibition area; and the tankpool24 team has stationed itself adjacent to the Merc tent. In like manner the Schwabentruck Iveco team has taken up a very prominent position just next to the Italian firm’s VIP tent. 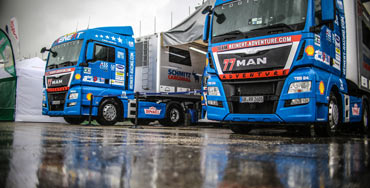 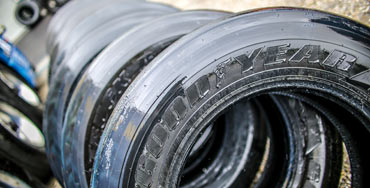