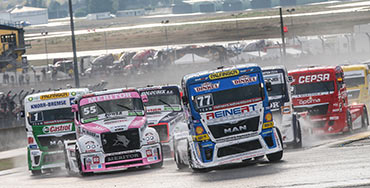 12. October 2014Le Mans - For the 53,000-odd spectators the final race of the season threw up a small surprise — a one-two victory for Buggyra pilots Lacko and Vršecký. Bösiger had been the pre-race favourite, starting as he was going to from pole position. But he just didn’t seem able to find his feet, losing a few places in next to no time. Reinert took over the lead, but soon deferred to Lacko’s determination to get ahead. The Lusatian then steadily fell back, lap after lap, crossing the finish line in ninth.
Lacko meanwhile had pulled out a sizable gap between himself and the rest of the field, while Vršecký and Hahn behind him bickered for the second podium place. At the finish the Buggyra pilot was ahead by a nose – well, bonnet – but their spat had cost them a lot of time, allowing their pursuers to close in perilously over the final laps. None of those trucks, though, had any real chance of a podium-place finish.
And so Janiec had to make do with fourth place, ahead of Albacete, Kiss, Bösiger, and Vojtíšek in eighth. Reinert was ninth, ahead of his compatriot Steffi Halm (MAN). With her single point the Lioness in the pack managed to make it into the Top 10 in the overall standings, equal on points with Hungarian MAN pilot Benedek Major, who’d sat out the races in Le Mans because of injury.
With his third-place finish Hahn ended runner-up in the championship. The top 10 in the final standings now read: Kiss 401 points, Hahn (383), Albacete (377), Lacko (314), Vršecký (255), Bösiger (235), Reinert (137), Janiec (70), Vojtíšek (61), and Halm and Major (both 49).
The final team podium had Buggyra on the top step, flanked by Truck Sport Bernau in second and Reinert Adventure (Hahn / Reinert) third. 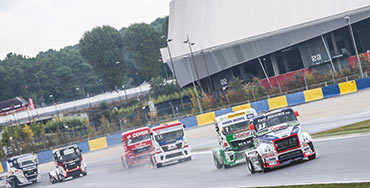 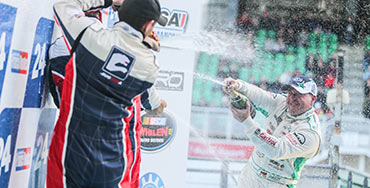