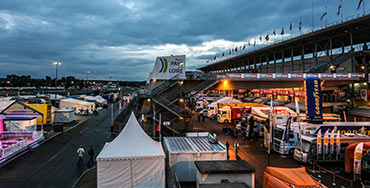 09. October 2014Le Mans - At some point last year it looked like the 2014 season of the FIA European Truck Racing Championship would consist of 11 rounds, but in the event we’ve had only nine — the races in Istanbul (TUR) and Smolensk (RUS) were either cancelled or struck off the schedule later. Which means the finale is already upon us. And the round this coming weekend at Circuit Bugatti is going to be a climax the likes of which we haven’t seen in years — three equally worthy title aspirants driving almost identical MAN race trucks, in a battle of nerves that looks set to go down to the wire.
At first glance Norbert Kiss (HUN) would seem to have the best prospects, leading the overall standings as he does at the moment. But thrice-European-champ Antonio Albacete (ESP) is only six points adrift, and defending thrice-champ Jochen Hahn (GER) another point behind.
Last year Albacete came to Le Mans with a lead of 11, but then Hahn picked up 51 of the 60 points up for the taking, the Spaniard coming off only third-best with 35 after Kiss, who scored two more at 37. So it’s still completely open. And, God forbid that any of the three should drop out in any of the races, the championship will only be decided in the last race late Sunday afternoon.
But even if all eyes are on this tense decider for the driver’s championship, there’s also the team championship that has, this season, been contested by a record number of teams. We admit it’s not as exciting here, and unless something untoward happens the title’s in the bag already for Truck Sport Bernau (Albacete / Bösiger).
A total of 20 trucks are registered for this round, German Gerd Körber (Iveco) the sole race-by-race pilot in a field of full-season entrants minus Hungarian MAN driver Benedek Major (Team OXXO), who withdrew at short notice.
Racing in Le Mans in the middle of October brings with it the weather willies. Old-timers still remember the Sunday at Le Mans 10 years ago, when the programme could only kick off at 1 pm. The circuit had been fogged over all morning, and when the air cleared the track was found covered with a thin layer of ice. Since that year, the teams have always worn their woollies to Le Mans. But it’s definitely not getting that cold this year. Cloudy skies are forecast, and temperatures at around 20°, as is the possibility of showers. Quite a contrast to the glorious weather in Madrid only last weekend.
Even the supporting programme is a complete contrast. The Jarama weekend was centred around the FIA ETRC; in Le Mans the racing is just one item in a packed schedule of events that doesn’t allow for even a gap of five minutes between activities on the track. To add to all that there are the show trucks, a clutter of corporate events, and a truck trade show, not to mention the fairground abuzz with fireworks and the concert, an inseparable part of this weekend like it is at the more famous 24 Hours of Le Mans. The extravaganza is going to be somewhat bigger this time, seeing as 2014 completes 30 years of “24 Heures Camion”.
We’d like to take this opportunity to correct a common misconception about the “24 Heures” in the name: the appellation was only tagged on to project the glow of the bigger 24-hour race in June. The race trucks don’t lap the circuit continuously for 24 hours, but run their normal FIA ETRC programme — two free practice sessions, a warm-up, two periods of qualifying (each followed by a SuperPole dash), and four championship races of 45 km each. 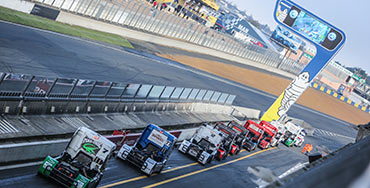 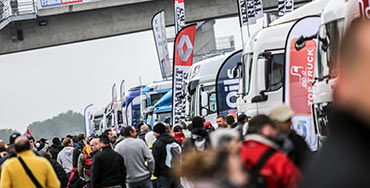