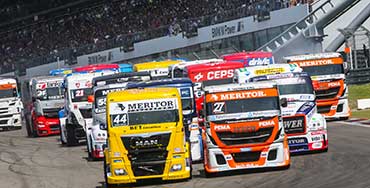 19. July 2014Nürburg - The temperature had risen to almost 30°C and the track surface was measured at more than 50° when the racers started to arrive at their positions on the grid — Steffi Halm on pole for the second time this season; alongside her ex-champion Gerd Körber, who won his first title when Steffi was just a tot entering school. Those who expected the past master to leave the young lady standing at the start were going to be disappointed. Halm shot straight into the lead, while Körber lost a couple of places right in the Mercedes Arena. And then the No. 22 Renault of the Portuguese José Souza slowed to a crawl right in the apex of the curve where Reinert had come to rest in the previous race. The truck stood right in the middle of the track, bringing out twin yellow flags while the rest of the field filed past.
By the time the Renault was finally towed away two laps later, much had happened on the track. Körber had fallen way back after a collision; his Iveco teammate Markus Altenstrasser (AUT), driving with a splintered windscreen, gave up a short while later. Vršecký had spun and was only able to resume his race at the rear-end of the field. Steffi meanwhile found herself hounded by a pack led by Bösiger. Soon enough she was overtaken not just by the Swiss veteran but also by Hahn, Kiss, Albacete, and Lacko in short order. Hahn meanwhile was subjecting Bösiger to continuous assault, hoping to induce him to make a mistake. But try what he might, he just couldn’t shake the 2007 champ’s composure and had to make do with second place, Kiss completing the podium. Albacete finished fourth ahead of Lacko. Steffi Halm followed in sixth, with Vojtíšek a fair distance behind her. Reinert managed a magnificent eighth, having started 23rd and last because of his failure to finish the first race. Vršecký too fought his way back up to collect two FIA points in ninth place, ahead of Frenchman Anthony Janiec (MAN).
Lutz Bernau once again stood on the top step of the podium for the team that bears his name, with Team Reinert Adventure (Hahn / Reinert) second and Buggyra third.
Kiss continues to lead the overall standings with 201 points, ahead of Albacete (196), Hahn (184), Lacko (141), Bösiger (137), and Vršecký (122). 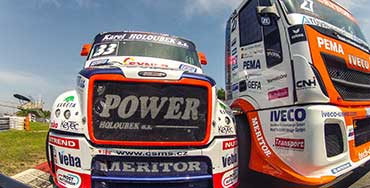 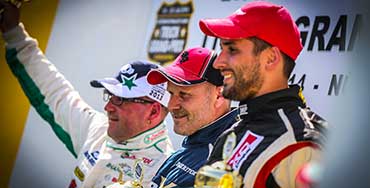 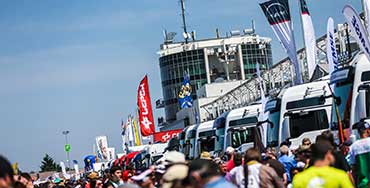