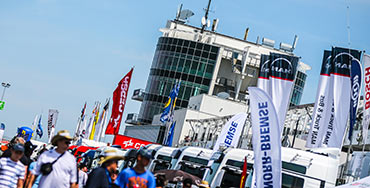 18. July 2014Nürburg - At most weekends in the FIA European Truck Racing Championship, Friday is usually the day for setting up the team and hospitality tents, or at best for taxi rides for the press and VIP guests. At the Truck Grand Prix on the Nürburgring Friday is when the action begins. First up early in the morning was the free practice and then the second, at around noon. The sky was clear and blue, the temperature quickly climbed above 25°C, and there was a pleasant breeze. The three MANler Norbert Kiss, (HUN), Antonio Albacete (ESP), and Jochen Hahn (GER) have tended to dominate all the practice sessions this season, but Adam Lacko (CZE) did manage to make it up there with them in his Buggyra Freightliner in the first free practice before he was shut out again in the second session.
Early afternoon when qualifying began, the mercury was pushing 30° and the track was measured at 57°. The top pilots, as it their wont, just wanted to qualify for the SuperPole with the least effort — and so nine of them, including one lady, were back in the pit lane after just one flying lap.
Kiss recorded the top time with his lap of 1:55.674s. Hahn, Albacete, David Vršecký (CZE) in his Buggyra Freightliner, the Swiss Markus Bösiger (MAN), Lacko, German race-by-race pilot Gerd Körber (Iveco) and his compatriots René Reinert and Steffi Halm (both MAN) were all confident their times would be good enough to put them in the shootout. With track temperatures running so high, conserving their tyres was more imperative than otherwise — the set has to last for both the following day’s races.
The battle for the final place in the Top 10 was fought over several laps between the Portuguese José Rodrigues (Renault) and Hungarian MAN driver Benedek Major. Rodrigues almost seemed to have it in the bag till Major snatched it away at the very last moment.
That the high temperatures weren’t exactly having a salutary effect on the tyres was evident in the SuperPole — Albacete’s first lap, a whole tenth slower than Kiss’s in qualifying, was good enough for pole position. Kiss himself wasn’t able to attain to it and had to make do with second on the grid alongside Albacete.
Lacko, having made amply clear in the morning that he was ready to take the fight to the MANs, made good on his intentions with an imperious drive that pushed a dismayed Hahn into fourth. Vršecký, Bösiger, Reinert, Körber, Halm, and Major took up the rest of the spots on the first five rows of the grid. 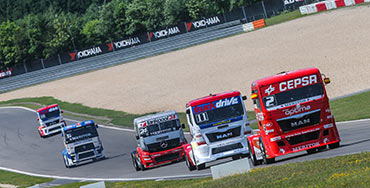 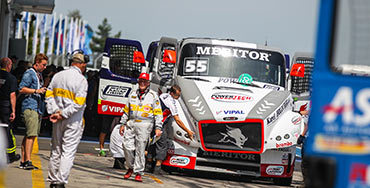