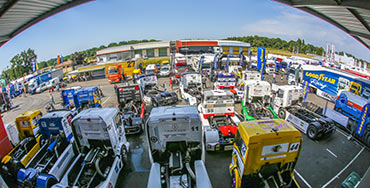 21. June 2014Nogaro - At about 6:30 this morning we had a brief thunderstorm over the Circuit Paul Armagnac in Nogaro, but the track had dried completely by the time the racers were ready for the warm-up. The three MAN pilots Norbert Kiss (HUN), Markus Bösiger (SUI), and Jochen Hahn (GER), and the Czech Adam Lacko (Buggyra Freightliner), were all able to crack the 1:55s mark with ease. But they were only warming up, of course; the gloves really came off in first qualifying. Kiss threw down the gauntlet with his very first lap, the fastest of the weekend till then, and ducked promptly into the pits. With a time of 1:52.901s there was clearly no question of anybody denying him a place in the SuperPole. Spaniard Antonio Albacete (MAN), Hahn, MAN pilot Benedek Major (HUN), Czech David Vršecký (Buggyra Freightliner), Lacko, Bösiger, and the German René Reinert (MAN) all likewise drove a single flying lap, then returned to the pits to conserve their tyres.
For Reinert at least, the tactic very nearly backfired — both Steffi Halm (GER) and Frankie Vojtíšek (CZE) managed it into the shootout ahead of the Lusatian, leaving him precariously in tenth place.
Even in the SuperPole Kiss was not to be stopped. He was already quicker on his very first lap with 1:52.552s, a hair’s breadth ahead of Hahn. At the last moment angry bird Albacete slingshotted in between the two with a lap 6.5 tenths of a second faster than Hahn’s best. Bösiger took the next place in the second row, followed by Lacko, Vršecký, Major, Reinert, Vojtíšek, and Halm. 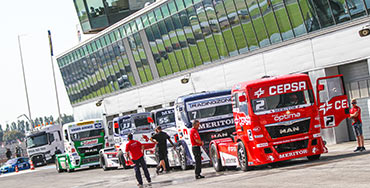 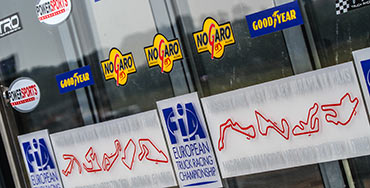