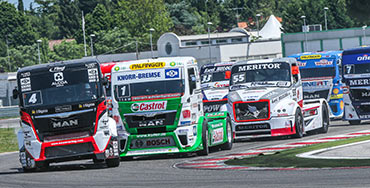 25. May 2014Misano - It was clear to everybody even before this season started that Norbert Kiss would be one of the primary contenders for the FIA European Truck Racing Championship. The Hungarian’s showing so far in Misano has already promoted him to title favourite. At the end of last year he’d stood at the top of the podium twice; this season it’s taken him only a day and a half to do that. All considered, his victory from pole in the third race was really much more dominant than his five-second lead at the finish might suggest.
Hahn defended his second place against Albacete’s relentless attacks right till the finish. Their most immediate pursuers – Lacko, Vršecký, and Bösiger – trailed this duo like pearls on a string before the Swiss dropped back towards the end of the race.
Once again it was a repeat all-German duel for seventh place by yesterday’s protagonists Reinert and Körber. But the Iveco pilot let up after he had his front bumper severed in an impact with the rear of Reinert’s MAN, contenting himself with eighth place, which would of course put him in pole for the day’s second race.
The final points places went to Major and Steffi Halm, the German blonde having fought tooth and nail to overcome the second half of the field after a pit start — her bright yellow MAN had made it too late to the starting formation. At the end she did have a bit of luck even in her misfortune, when Renault pilot José Rodrigues (POR), who’d finished 10th, picked up a 30-second penalty for having run over a penalty marker. Again these innocuous-looking skittles played a decisive role in the results, as they did yesterday. 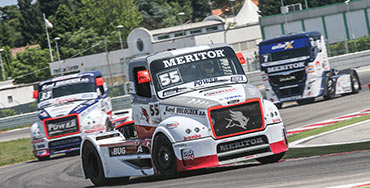 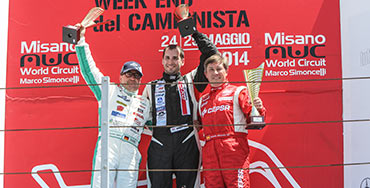