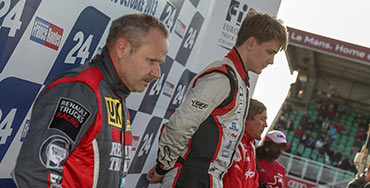 13. October 2013Le Mans - The final race of the season took place before 51,300 spectators in splendid weather. Polesitter Major took the lead, with Bösiger right on his tail. Janiec had a less than perfect start and held up the field before he was relegated right to the rear. His Renault evidently had something wrong with it, and the Frenchman threw in the towel on the sixth lap. The pack led by Albacete followed a whole four seconds behind the leaders. Hahn had attached himself to Albacete’s rear. The Spaniard needed to put at least six places between himself and his German adversary to be crowned champion. In case both finished level on points, the Cepsa pilot would take the title with a higher number of wins. But if Hahn held on, he would be champion. The pursuers slowly inched towards the leading duo. And while everyone watched for Bösiger to snatch the lead from Major, it was Albacete who suddenly attacked the Swiss Renault pilot. But he could not prevail, and that’s how they all finished the race. Major collected a fourth win in his rookie season, and he was accompanied to the podium by Bösiger and Albacete. The Spaniard wasn’t particularly joyous about his 23rd podium finish of the season. Hahn’s team, on the other hand, exuberantly celebrated his fourth place, which otherwise would only have been a cause for disappointment. Their man was, after all, champion — for the third time in a row.
The rest of the results were as good as forgotten. Oestreich was fifth, ahead of Lacko, Vršecký, and Reinert. The two final points places went to MAN pilots Jeremy Robineau (FRA) and Javier Mariezcurrena (ESP).
MKR Technology was the top team in the season’s final race, ahead of Truck Sport Lutz Bernau (Albacete / Oestreich) and OXXO Energy Truck Race Team (Kiss / Major).
Thrice-champion Hahn tops the final championship standings with 417 points, followed by Albacete (412), Oestreich (316), Kiss (301), Vršecký (294), Lacko (227), and Bösiger (201). 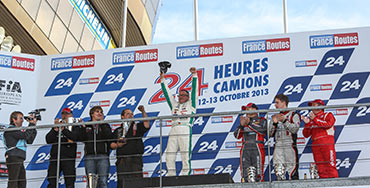 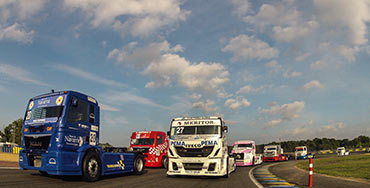 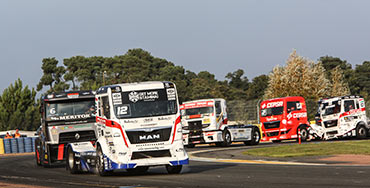 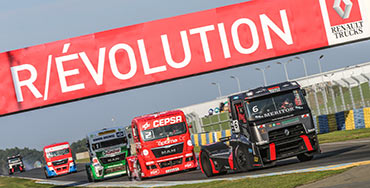