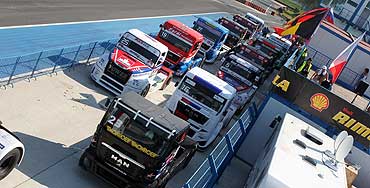 29. July 2012Smolenskring - A clear sky in the morning gave reason to think that this will turn into another hot day at the Smolenskring. The weather forecast predicted some showers, but those did not come. In the warm-up session, Antonio Albacete drove the fastest time in his MAN, followed by his German teammate Jochen Hahn and the Swiss Markus Bösiger (Renault). During the second timed practice it became a little more serious and also in this case Albacete set the standard. The Spaniard was almost one second faster than Hahn. The three MKR-Renault drivers Markus Oestreich (GER), Adam Lacko (CZE) and Bösiger followed on the next positions. The Czech David Vrsecky (Freightliner) was on rank number 6 and almost two seconds behind the frontrunner. The four MAN drivers Norbert Kiss (HUN), Mika Mäkinen (FIN), Dominique Lacheze (FRA) and René Reinert (GER) completed the list of the top ten for the SuperPole. Alexander Lvov (RUS), Jose Bermejo (ESP), Frankie Vojtisek (CZE) – all of them driving a MAN – as well as the Russian Mikael Konovalov, who will drive the Buggyra Freightliner with the number 25 today, instead of his fellow citizen Jurii Egerov were not able to qualify. In the decisive SuperPole Albacete was able to speed up again and no one was able to better his time of 1:50,477 minutes. Hahn again received the second starting position. On the following positions are: Oestreich, Bösiger, Vrsecky, Lacko, Kiss, Mäkinen, Lacheze and Reinert. 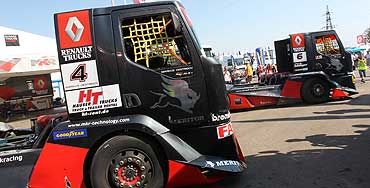