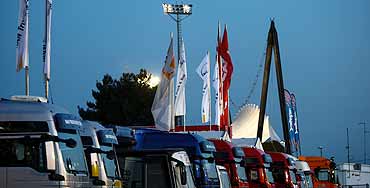 18. May 2012Misano - All concerns that the teams of the FIA European Truck Racing Championship would not be able to make it on time after the race in Istanbul turned out to be unnecessary, because the trucks arrived at the paddock of the Misano World Circuit on Wednesday night. That way the tents could be put up on Thursday without any hustle. The service team had plenty of time today to change the engine in the MAN truck from Dominique Lacheze (FRA). This Friday is usually used for the technical acceptance, but the MAN - mechanics also changed the engine in Antonio Albacete’s truck. Everyone was truly relaxed. That does not apply to the team of MB – motorsports (at least not for the last couple of days). Just one week ago they received their Mercedes “they wished for” from Croatia. Here in Misano they gave him the last finishing touch until the race truck turned into a tankpool24 – Mercedes – Benz. The new driver Ellen Lohr posed happily for the photographers. There is almost no one in the truck racing paddock who has more race experience or more PR flair than the German driver, who has driven almost all race cars for Mercedes. Thus she guides the crowd of photographers. The Schwabentruck – Team also had several photo shootings with their new race truck Iveco and of course “Mr. Truck Racing” Gerd Köber (GER). Mario Kress caused some confusion caused by the fact that in the morning there had been another MKR – Renault standing in the paddock with the race number 75. However, the manager explained that they would not put another truck into the race, but that this had only been the show and PR truck of the team, which had just recently been presented at an event. 19 drivers are registered for the Championship, but the MAN – driver of the Frankie Oxxo Truck Racing Team and the Scania of Erwin Kleinnagelvoort (Dutch) are missing in Misano. There will be 16 drivers at the starting line tomorrow including race – by – race driver Köber. 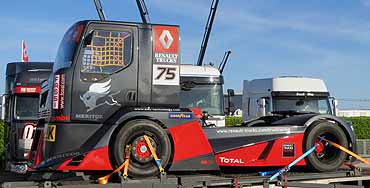 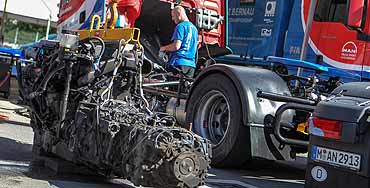