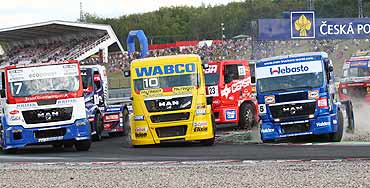 30. August 2009Most - The event in Most attracted an audience of more than 50,000. On Sunday the thermometer showed 10 °C (50 °F) in the early morning and although there was only a light cloud cover and a lot of sunshine the temperatures never rose above 24 °C (75 °F) during the day. And with 38 °C (100 °F) the tarmac lacked the proper sticking point. But during the warm up in the morning the track was still cooler and the pilots started a warm up in the true sense of the word – particularly for the tyres. And also in the timed practice everybody clocked slower lap times than the day before. While the two MAN pilots Antonio Albacete (ESP) and Jochen Hahn (GER) posted their fastest times already in their first lap and finally secured a starting slot on the first row of the grid, the two Buggyra drivers David Vrsecky (CZE) and Markus Bösiger (SUI) managed to improve their times towards the end of the timed practice. But the Czech just missed by 3 hundredths and had to be content with the third slot on the grid, ahead of his Swiss team mate and MAN pilot Chris Levett (GBR). Just 4 tenths split the first five drivers on the grid.
The first race was quite uneventful. Albacete made good use of his pole position and took a lead he was never to lose. At first Hahn was close behind his MAN colleague, but more and more he had to defend his second position against a permanently attacking Vrsecky. And behind these two ‘fighting cocks’ Bösiger was lying in wait, hoping that they would eliminate each other. Finally the trio crossed the finishing line within tenths of each other. Levett and the Austrian Egon Allgäuer (MAN), both completely unchallenged, came home 5th and 6th respectively. But the remaining places in the points were hotly contested. In the penultimate lap the Czech Frankie Vojtisek (Renault) and also the Hungarian Balzs Szobi (MAN) had dropped back considerably. The Renault pilot still managed to finish 10th and score one point, but Szobi finished out of the points and later was even disqualified. The positions ahead of Vojtisek were claimed by the Brit Stuart Oliver (MAN), Renault pilot Anthony Janiec (FRA) and Alexander Lvov (MAN) from Russia.
In the final race of the weekend Janiec, who had finished the first race in 8th, was on pole position with Oliver alongside him, same as on Saturday. The winner Albacete was placed on 8th ,behind Hahn. In between the pilots Allgäuer, Levett, Bösiger, and Vrsecky were lined up. This time the start was quite chaotic, and nobody was surprised that after the race the stewards started making some enquiries. Oliver pulled away quickly from the start, Janiec at once dropped back, Allgäuer found a gap between Oliver and Levett and surged forward. But the chicane is not wide enough for three trucks driving side by side. Levett had no choice but to plough through the gravel bed, and he rejoined the field behind the other two pilots. Behind the leading trio some rather dramatic scenes took place. Obviously Vojtisek had collided with Bösiger’ Buggyra, sending him into a 180 degree spin where he remained stranded in the middle of the track. In order to avoid a collision, Hahn had to take to the gravel, too. By this time there was absolute bedlam in the field. Oliver was still leading, Vrsecky had worked his way up to 2nd, ahead of Allgäuer, Albacete, Levett and Janiec. Hahn, however, had dropped back to 7th position and Bösiger even to 13th. In the fourth lap Albacete had fought his way up to 2nd almost unchallenged, but Vrsecky was already so far ahead that the Spaniard could not challenge him for the win anymore. But in the chasing field the battles went on. Hahn was now behind Allgäuer in 4th position. During three laps the German, who obviously seemed to be faster, tried to pass the Austrian. In the seventh lap there was a light contact and Hahn dashed past his opponent. In the opinion of many observers a tough but normal overtaking manoeuvre. The stewards, however, were of a quite different opinion and the man from Altensteig incurred a drive-through penalty so that, in the penultimate lap, the MAN pilot could forget his podium place and was back to 9th instead. Bösiger had managed to work his way back up to 8th, when there was a hefty push from behind and from then on the Buggyra Freightliner was wobbling along the track and the Swiss finally came home 12th. Far behind the leading duo Levett finished in 3rd, four tenths ahead of Oliver. Janiec crossed the finishing line in 5th, followed by Allgäuer, Lvov and Szobi. The top ten were completed by Hahn and Vojtisek.
After the victory ceremony the stewards debated on the start, but the only subject worthy of discussion seemed to be Levett’s evasive manoeuvre. In the end they accepted that Levett had not had any other option, and so the young Englishman was spared the experience Jochen Hahn had to undergo the day before – having to return the cup and the flowers.
In the overall ranking Albacete – with 344 points - could further extend his lead ahead of Vrsecky (329), Bösiger (259), and Hahn (237).
In the team ranking both races were won by Buggyra (Vrsecky / Bösiger), followed by Team HahnOxxo (Hahn / Szobi) und Team Birds-Bernau (Levett / Lachèze).