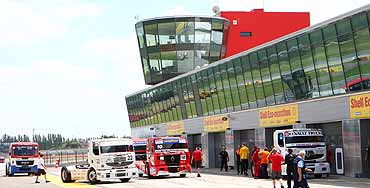 16. June 2009In the last few years most of the truck racers met in Nogaro shortly before the start of the season for the almost customary “dry run”, but this year the first meeting in Southern France will be on the coming weekend to attend the races. After the round in Albacete the Race Director of the Circuit Paul Armagnac told to the teams that they could leave their equipment in the guarded paddock of the circuit on their way north. From Nogaro the teams then went home by car or by plane from Toulouse and Bordeaux respectively. Others had the opportunity to leave their trucks with large car dealers in Southern France, thus reducing their costs considerably. But from Thursday on everybody will get together again in that small quiet town, because the round in Nogaro is one of the few true 3 day events with a lot of action on Friday already.
And again a crowd exceeding ten times the population of Nogaro will flock to the circuit to enjoy a weekend of almost non-stop action. In addition to the races of the FIA European Truck Racing Championship there is also a round of the national French Truck Racing Championship being held, plus several races in the supporting programme and the obligatory truck parades.
In the FIA races all the pilots will participate and Dominique Lachèse is going to take part as guest driver in the MAN truck he gained so many points with last year.
But the main focus will certainly be on the battle between the foursome – the two Buggyra pilots Markus Bösiger and David Vrsecky, and the two MAN drivers Antonio Albacete and Jochen Hahn. But while Bösiger and Vrsecky, as team mates, act in concert and can also support one another, Albacete and Hahn are “only brand colleagues” who will fight each other in the same way as any other opponents. The Spaniard leads by a comfortable margin at the moment, but in Nogaro the two Buggyra drivers will try to gain ground. For Hahn it’s now first and foremost to live up to his successful race on the second day in Albacete and to finish this round without having to retire due to a mechanical failure. Because then the German is on a par with any opponent, as he could impressively demonstrate in Spain.
The weather will – according to the forecast – certainly be to the liking of the truck racers. On Thursday the temperatures will probably rise above 30 °C (86 °F), but for the rest of the weekend it will be slightly overcast, so that the temperatures will most likely not exceed 25 °C (77 °F) – and it will stay dry all weekend.