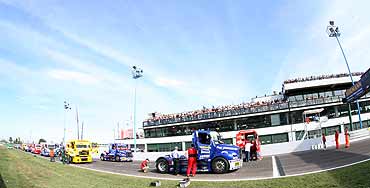 19. May 2009To begin with the best thing – the whole weekend will most probably be bright and sunny with temperatures of about 30 °C (86 °F). On Friday and Sunday it could become a bit overcast, but there is a very low rain probability. Rarely the weather services were that conform with their forecasts.
With regard to the races there is no information to speak of to this day. There was no entry list published yet, neither is there any official schedule. The schedule on this site was made up of excerpts from different publications. Admittedly, the schedules in Misano maintained such a continuity that actually there will certainly be some changes in the supporting programme only.
The circuit at the Adriatic Sea was always one of the favourite tracks for most of the truck racers; however, some of the smaller teams indicated already in Assen, that they would not go to Misano. They declared that the distances they would have to cover within a relatively short time, are simply too great. This is also the reason why, after the races in Misano, some of the top teams will not return to their local workshop, but will proceed on their journey directly to Albacete. We can only hope that their plans won’t be upset due to some serious damages that are impossible to repair in the paddock. Anyway, there were some tentative enquiries beforehand about who to team up with for the journey to Spain. Finally some of them will again travel overland along the Riviera and the Costa Brava, while others prefer the direct ferry link from Genoa to Spain. But no matter where they will be located on Saturday morning, May 30, they all will be glued to the television at 9:45 a.m.: DSF, report about the truck racing round in Misano.
In Misano we not only watched extremely exciting races, but very often there were also problems with the GPS monitoring of the speed limit of 160 km/h. The frequencies the nearby military airbase radiated were so high that there were massive transmission interferences with the GPS signals. And that’s why Daniel Seiler with a (mis-)measured (and never confirmed) speed of more than 1,500 km/h entered the truck racing ‘history books’ as unofficial ‘world record holder’. In order to avoid any discussions a priori, the organiser will certainly have again radar monitoring in some exposed positions.
Furthermore, Misano always was a location where the commercial vehicle industry is strongly represented, which means that interested parties have the opportunity to test-drive their dream truck on the track during the breaks, and the rest of the people will be strolling around the paddock and have a look at some very beautiful specimens of trucks.
The entrance fees are rather moderate: 12 Euros on Saturday and 14 Euros on Sunday. For further information please click on ‘Tickets’ on this site.