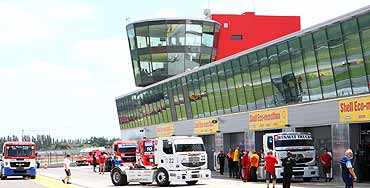 27. June 2008Nogaro - Last night many people feared that the FIA European Truck Racing Championship is under a curse this year. Although, according to the weather forecast, the sun was supposed to shine, there was a heavy thunderstorm in Nogaro. But today at last there was the expected clear blue sky. However, another disaster is looming already. FIA Technical Manager Fabien Calvet had to inform the truck racers that, as of Sunday night, another trucker strike is imminent – but this time in France. So to avoid another disaster like the one in Albacete after the races, some teams consider packing as many of their belongings as possible during Sunday already so that they can set off directly after the final race.
Today, after the press drivings in the morning, an additional one-hour free practice was on the agenda for the truck racers, but surprisingly the teams which took this opportunity were almost exclusively the top teams. Of the 26 RaceTrucks registered, only 24 had arrived. Race-by-race pilot Jennifer Janiec is going to start for the French Cup, and Antonio Conejero had not come to Nogaro. But except for those two, the entire FIA phalanx was on the spot. In the timed free practices the Buggyras with David Vrsecky and Markus Bösiger were extremely predominant. In the second practice Antonio Albacete on his MAN, the first non Freightliner pilot, was already 1.2 seconds slower than Vrsecky’s fastest time, and was about 3 tenths quicker than the second MAN with Philippe Belloc. A further 1.2 seconds behind was Markus Altenstrasser, the first Renault pilot, followed by some more MAN drivers such us Jochen Hahn and Dominique Lacheze.
But it’s not till tomorrow in the first timed practice that the cards will be shuffled in earnest.