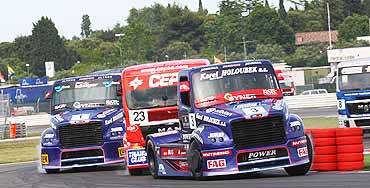 24. May 2008Misano - Although there were some clouds obliterating the sun, temperatures of about 25 °C (77 °F) and a dry circuit were for the truck racers a cause for rejoicing after the weather disaster in Barcelona – apart from the start of the Championship race. The races for the free practice proceeded as expected and without any surprises. In the timed practice there was suddenly bedlam in the pit lane, the practice was interrupted because there was a stack of tyres on the circuit. When the track was clear again, there were some changes of positions. Freightliner pilot David Vrsecky snatched away the pole position from Antonio Albacete (MAN) at the very last moment, Markus Bösiger stole third position on the grid from Jean-Philipp Belloc, and behind him was Jochen Hahn (both MAN).
In the Qualy race there was some slight confusion on the starting grid. At the time when the race should have started, the pit lane was opened again to let some late-comers take their places on the grid. For some reason that is incomprehensible, in Misano the pole setter has to start from the outside track. And when the two pilots on the front row get away equally well, the one on the inside track always has an advantage in the first bend. And that’s what happened in the Qualy race, too. Vrsecky and Albacete were side by side, and – consequently – driving on the inner track, the Spaniard took the lead in the first bend. On third was Bösiger, ahead of Hahn and Belloc. In the middle field Jose Bermejo (Mercedes Benz) and Mikhail Konovalov (MAN) were involved in a crash that meant the end of the race for both drivers. The top trio had pulled away gradually from the rest of the field, Vrsecky was closing on Albacete at times, and got in touch several times, but the Spaniard’s win was never really in jeopardy. Bösiger was lying in wait, hoping to somehow benefit from the tussle of the two front runners, but to no avail. Hahn and Belloc put up the most exciting fight of the race. In the penultimate lap the French eventually managed to pass, and the German had to be content taking fifth position.
Next in the positions for the points were Markus Altenstrasser (Renault), followed by Dominique Lacheze, Jean-Pierre Blaise, Egon Allgäuer, and Pascal Robineau (all of them MAN pilots).
The start of the Championship race was a novelty in truck racing, making all other matters irrelevant for a while for many people involved. Only 7 trucks were already on the grid, and 16 more were on the pit lane waiting to be allowed to enter the track. But the stewards who had been rather generous at the Qualy race, were now all the more relentless. The pit lane was closed on the dot. There were complaints and protest which delayed the start, but in the end it was to no avail. Now the big pack had to chase after the small starter field from the pit lane.
And now Albacete experienced what had already happened to Vrsecky in the Qualy race: In Misano the pole setter very often gets the short end of the stick. The Czech managed to get in front of Albacete after the first bend and pulled gradually away till he crossed the finishing line. The Spaniard and Bösiger fought hotly for 2nd position. And although the Swiss seemed to be definitely faster he was unable to pass the red MAN. On fourth was Hahn, with Belloc who had started from the pit lane but managed to work his way up the field, close behind. The remaining points went to Altenstrasser, Blaise, Frankie Vojtisek (Renault), Stuart Oliver, and Balas Szobi (both MAN).
Vrsecky extended his lead in the overall standing and has now 78 points, followed by the Bösiger (60), Albacete (54), Belloc (47), and Hahn (38). The team ranking is plain sailing for Buggary, ahead of Team Koller + Schwemmer, and Team Frankie.