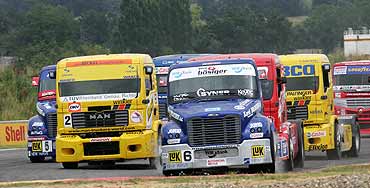 23. June 2007Nogaro - The weather was as forecast – with the sky partly cloudy and a temperature of around 25°C (77 °F), yet it was often unpleasantly humid. When the Qualification race started, the temperature on the track’s surface was about 35 °C (95 °F). As to Simeon Martin, not only the Team Frankie was irritated. The Spaniard who drives the red Renault this season, did not arrive in Nogaro and couldn’t be contacted by phone either. So Ross Garrett, who substitutes for Frankie Vojtisek, will be the only pilot starting for the Renault Team Frankie. In the timed practice David Vrsecky on his Buggyra Freightliner achieved a superb time with 1:52.819, and his team mate, Markus Bösiger, was not much slower. The next ones on the grid were the three MAN pilots, Antonio Albacete, Gerd Körber and Egon Allgäuer, ahead of Jochen Hahn, the only Mercedes Benz driver in the leading group.
In the Qualification race, however, Vrsecky lost his lead to Bösiger right from the start, and Körber managed to pass the Czech, too. And after some skirmish, he even fell back on 6th position behind Albacete, Hahn, and Jean-Philippe Belloc. Bösiger pulled away gradually and got a safe distance to his chasers. In the penultimate lap suddenly the start-finish straight disappeared under a white cloud of smoke: a burst turbo at Jochen Hahn’s truck. In the end, Vrsecky managed to pass Belloc and crossed the finish line with an advantage of 4 seconds to the French. Allgäuer secured his 6th position ahead of the two permanent duellists, Stuart Oliver and Chris Levett. Both Hans-Joachim Stuck (on 9th) and Ross Garrett, the first as guest driver and the second as substitute for Frankie, were in the points. And that’s when the dilemma started again. As race-by-race pilot, Stuck was entitled to keep the points – same as father and son Rodrigues – whereas the points where denied Ross Garret as a substitute for a registered FIA pilot. Even if the German would participate in all the upcoming races of this season, he would not have the minimum number of races required. Later on Permanent Race Director Tony Iddon and FIA Technical Delegate Fabien Calvet gave a short statement, declaring in unison that now Stuck would not get any points either. During the lunch break the entire engine and the gearbox of Hahn’s Mercedes were replaced. This was completed at record speed – about one and a half hours, and this effort proved to be worthwhile.
At first Bösiger took better advantage of his pole position than Vrsecky in the race before. The Swiss came down to business right from the start; he took the lead and held this position until he crossed the finish line. Körber, however, drifted so far on the outer track when entering the first left bend, that not only Albacete passed him, but Allgäuer, too, who had made an excellent start. They were closely followed by Vrsecky, Belloc, Oliver, Levett and Stuck. While Bösiger and Albacete gained some ground, there were fierce battles going on at the chasing pack. Hahn came charging up the field from his 18th position on the grid and already in the 3rd lap he managed to get passed Hans-Joachim Stuck. A bit later the Swabian overtook Levett and Oliver, but then he met his match in Belloc. The quintet Allgäuer, Körber, Vrsecky, Belloc and Hahn went on fighting hard lap after lap. But whatever Hahn tried, there was no way to pass Belloc. Vrsecky was a bit more successful. He constantly attacked the drivers ahead of him and in the 8th lap the Czech managed to overtake Körber and then started to charge Allgäuer. After passing the long straight, when entering the series of bends, he drove alongside the Austrian and was even a bit in the lead when entering the next corner. Allgäuer, however, had an advantage as he drove on the inner track. None of the two fighting cocks made way for the other, but then it was tough luck for Vrsecky. After a light contact the Buggyra pilot skidded on the kerbs and from there he took to the grass. Körber and Belloc, both driving closely behind Allgäuer, took the chance to pass the Czech, too. But then Vrsecky rejoined the track directly in front of Hahn. Now the distances between the trucks in the chasing field had become greater, and it seemed that not only the winners for the first two positions were already clearly evident. Hahn’s Mercedes was severely damaged, over the left rear tyres, parts of the bodywork were dragging, which was rather a hindrance for the faster driving. But the remaining quartet closed up in the final lap, and now there was a difference of less than a second when they took the final chequered flag. And only a few metres before the finish line, Körber succeeded to snatch the third position on the podium from his team leader Allgäuer.
Behind Oliver and Levett who – as usual – were constantly fighting during the race, Stuck claimed 10th position.
The team ranking was again won by Buggyra, followed by Team Allgäuer und Team Hahn. It was not possible to get an official ranking list from the organizers. In the evening, in the press centre, the answer from FIA Truck Racing Commission President Juan Pons – when asked about the chaotic points system – that he would clarify everything on Sunday, did not go down particularly well with the attendant journalists.
But there was something pleasant, too. Lutz Bernau had made a Nogaro Truck Racing poster into a kind of huge get-well-card for Frankie Vojtisek, and had it signed by all the people belonging to the truck racing community.