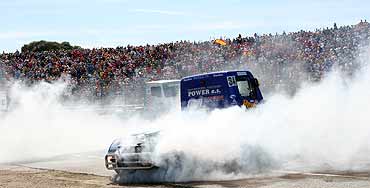 25. September 2006At an altitude of more than 700 m (2,134 ft) lies the circuit of San Sebastian de los Reyes, in the north of Madrid. Since the start of the European truck racing the final race was always in Jarama on the first weekend of October. In 2002, however, the truck racer met at the Lausitzring for the final round, and on the following years it was always in Le Mans. But last year Antonio Albacete had not to wait for the race in France to know that he was the winner, because during the whole season the Spaniard vastly superior that here in his home town of Madrid he could already ensure his title before an audience of about 70,000 people. But this year everything is totally different.
In the last two rounds of the FIA European Truck Racing Championship a pilot can score up to 120 points; so an advantage of 12 points to Gerd Körber, 15 to Jochen Hahn or 41 to Markus Oestreich is not that much. The three German opponents are long enough in the truck racing business to know they are still in contention for the title – and will fight to the end. How fast it can happen that you come off a race without having gained a single point, Körber, Hahn and Oestreich experienced in Most and Zolder. Minor defects causing great trouble, some carelessness either of the pilot himself or some of his opponents – and he is out of the ranking.
In addition to the four above mentioned drivers, there are another 27 pilots at the start in Jarama. 7 out of these 31 pilots are race-by-race drivers, who – although they cannot score points – can certainly affect the course of one or the other race. The more trucks there are on the circuit, the more imponderable things may happen.
Last year, Manuel Gozalo’s horrible accident with his “very ancient” Phoenix MAN was the focus of interest. Let’s hope that this year there won’t be such an incident. After last year’s experiences, let’s proceed on the assumption that meanwhile the gravel bed will be in such a condition that it will actually have a braking affect. And at this season, great importance was attached to the safety standard at the technical inspections of the race trucks.
The programme in Jarama is tightly organised, although a bit scanty. At the beginning of the season it was said that the rhino’s GT series will be included in the programme both in Albacete and in Jarama. But since we waited in vain for this mixed sport cars series in June, they could have tried to organise something else for Jarama. One single series – with the Renault Clios – and considerable lapse of time in between, with no attractions for the audience, that would have baneful effects for any other circuit – but not in Jarama. In view of the atmosphere there is no other race track comparable to the Spanish “roller coaster”. Where else are there cheers for the marshals when they sweep the track. When there is no action on the circuit, the fans arrange their own programme.
For the race trucks this extremely tight schedule is possibly not at all favourable. Time intervals of merely two hours between the starts of the timed practice, the Qualification race and the Cup race mean there is a maximum time of one and a half hours between the end of one race and the start of the next one. Considering the time for the Parc Fermé and the time when the race trucks have to line up before the actual starting grid, there are less than 60 minutes left for repairs and service. This schedule does not exactly contradict the regulations, however it could become rather problematic, cause the teams can forget engine and gearbox reconditioning.
As expected, the weather will again be splendid, in spite of the autumn season. Temperatures will be about 25 degrees C (77 degrees F). There will only be shreds of clouds so that there is no great risk of rain. At least, that’s what wetter.com says. The local weather service, however, forecasts a 50 per cent probability of rainfall for Sunday.
The EUROSPORT TV report will be aired on Tuesday, October 10, at 23:00 hours (11:00 p.m.) with a rerun on Friday, October 13, at 8:30 hours (8:30 p.m.).