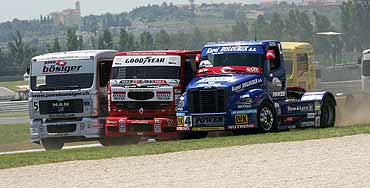 28. May 2006Misano - Sunday was another sunny day and a crowd of more than 30,000 came to the Autodromo di Santamonica, and their expectations were not disappointed. Already during the Warm-Up Antonio Albacete (MAN) beat the magic 1:40 limit. Another MAN-driver, Markus Bösiger, after another change of the differential unit reached second-best Warm-Up time. During the following timed practice he could not better his time - contrary to his keenest competitors - so that he was behind Jochen Hahn (Mercedes-Benz), Albacete, Gerd Körber (Buggyra Freightliner) and Markus Oestreich (Mercedes-Benz). At the Qualifying-Race there were two spectacular events; one in the first and the other in the last lap, but both at the same spot, the first left turn – named 'Curva del Carro'. Hahn came off the winner of the start duel, closely followed by Albacete, and than Körber and Oestreich, with the rest of the gang in tow. When the field pushed towards said turn, Oestreich and Körber clashed together, and both SuperRaceTruck ex-champions took to the gravel bed. Bösiger who was close behind slowed down a bit and Frankie Vojtisek (Renault) took the chance to pass him and got 3rd position. The top quartet went off while Körber and Oestreich tried to get back on the track. The Buggyra pilot finished the first lap on 11th position and then began an impressive wild chase, but the tall man from Fulda had to take to the pit lane because his Mercedes was badly damaged. On 5th position Ross Garrett (Foden) settled in front of Adam Lacko (MAN). Both pilots have the reputation of being 'not overtakeable'. Körber could rush through the middle of the field without much resistance from the others, neither did team mate David Vrsecky put up a tough fight, but then the German came across Lacko and Garrett. For the next 4 laps the trio stayed close together, but then Lacko opened the attack. At the already mentioned 'Curva del Carro' Lacko dashed through the grass on the inside and fully hit the Foden's side panel causing the truck to spin round and careen from the track. Both the Buggyras brushed past undamaged and took 5th and 6th position respectively behind the leading quartet which was meanwhile far ahead. Lacko finished on 7th position, while Garret with his badly battered truck had to leave 8th position to Niko Pulic (Mercedes-Benz). The last to get some points in the ranking was Markus Altenstrasser. <br />
At the Cup Race Oestreich had to start from the last row on the grid while Mercedes-Colleague Hahn had pole position. With such a running start a lot of observers thought that, right from the starting line, Albacete was so far in advance of the other pilots it was suspected that it could have been a false start. This should normally have resulted in a drive-through penalty. But the stewards did not intervene and so the race went on. Hahn tried several times to attack, but did not take any bigger risks. For the Swabian the 15 points were more important than some spectacular tour through the grass. So Albacete scored his second Cup Race victory of the weekend. For the next 4 laps Vojtisek could defend his 3rd position against a fiercely attacking Körber, before the Renault pilot had to submit to the Buggyra which was definitely faster. Now there was an all-Czech trio with Vojtisek, Vrsecky and Lacko. But there was no room for compatriot emotions, they fought tooth and nail. And here also the Renault was at the disadvantage. First, Vojtisek had to let Vrsecky's Freightliner pass then Lacko overpowered him. And finally Markus Oestreich popped up who had ploughed through the whole field. Once more the man from Fulda gave an impressive demonstration of his truck racing skills. He did not stay long behind Vojtisek; 2 laps before the finish he overtook Lacko and could gain 5th position behind Vrsecky. Vojtisek, and especially Lacko, later got in some trouble with the stewards. While the Renault pilot got a 10 seconds penalty for crossing a marker and thus had to switch positions with Markus Altenstrasser, Lacko was disqualified because of overspeeding. So Alain Buffa (MAN) moved to 10th position behind Vincent Crozier (Renault) and Garrett and could gain his first EM point. Rather unpleasant was the outcome of the Cup Race for Markus Bösiger. Already from the start the Swiss fell back several positions, later he got drive-through penalty and then decided not to re-enter the race. Albacete, who had a dreamlike weekend when gaining 59 out of 60 possible points, is now in the lead with an advantage of 27 points in the overall standing, followed by Hahn (80), Körber (79), Vrsecky (69), Oestreich (49) and Bösiger (33).