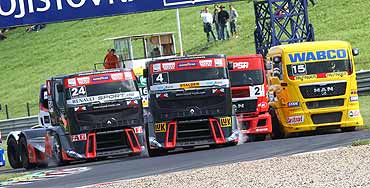 28. August 2010Most - After a stormy night the truck racing community woke to a chilly morning. During the warm-up in the early morning Markus Bösiger (SUI) in his MKR Renault clocked fastest time, with MAN pilot Antonio Albacete (ESP) lapping just fractionally slower. The other drivers were 1.5 seconds and more behind. But the second timed practice 90 minutes later was a lot clearer. Again the Swiss posted fastest time, followed by British driver Chris Levett (MAN) and Bösiger’s team mate Markus Oestreich. The trio was only separated by two tenths of each other – and behind them there was a gap of more than 1 second to the fourth placed, the Russian Alex Lvov (MAN). But finally the SuperPole played the decisive role. After a 5-minute break under Parc Fermé conditions the top ten lined up to fight for the best grid-positions in the first race. Oestreich secured pole with 2:02,132 ahead of team colleague Bösiger, followed by Levett and Albacete. The positions on the 3rd row fell to the two MAN pilots Jochen Hahn (GER) and Adam Lacko (CZE). Title holder David Vrsecky (Buggyra Freightliner) found himself 7th on the grid, followed by Lvov, Renault pilot Anthony Janiec (FRA) and Uwe Nittel (GER) in his Buggyra Freightliner.
The following Championship race was delayed by more than 20 minutes. While the trucks were on their way to the starting grid, suddenly Nittel’s RaceTruck suffered a split fuel line, and the German had to park his truck on the grass beside the start-finish straight for repairs. But some of the diesel had spilled onto the tarmac and had to be removed and soaked up with absorbent materials. When eventually the go-ahead was given, Nittel was banned from 10th slot on the grid to the pit lane with a field of 20 starters ahead of him.
Both MKR pilots made a superb getaway with Bösiger taking the lead. But behind them there was a first chicane skirmish. Lacko span off the track and into the gravel bed, but when he rejoined the track he collided with Albacete, and suddenly found himself in 3rd position. Mid-race the Czech incurred a drive-through penalty which he ignored, so that after the race a 25-second penalty was imposed, dropping him from 3rd to 9th place. In the meantime a heavy rain shower had lashed down, and the extremely wet track disturbed the field considerably. If someone put his foot down on the accelerator just a bit too hard, he found himself on the grass or the gravel. But Bösiger held the lead unchallenged throughout and Oestreich claimed runner-up spot – a strong double win for the MKR Renault Team. The positions 4 – 7 were hotly contested by the 3 MAN drivers Albacete, Levett, and Hahn, and Vrsecky in his Freightliner. Right until the end of the race positions changed several times, but eventually the Englishman finished in 4th. When Lacko incurred his time penalty, everybody was promoted one position and Levett even made it onto the podium. Albacete was in 4th position, followed by Vrsecky and Hahn. Janiec finished 7th ahead of Lvov who secured pole in the second race. Behind Lacko who had dropped back to 9th, Nittel claimed the last place in the points. In his second truck race Hendrik Vieth (GER) came home 11th, barely missing a points-finish.
In the second race, where the top 8 finishers from race 1 line up on the grid in reverse order, pole setter Lvov managed to hold his lead for a while, but right from the start Hahn was glued to the rear bumper of the Russian, closely followed by Albacete, Janiec, Oestreich, Lacko, Levett, Vrsecky, Bösiger and Nittel. The pressure they put on Lvov increased constantly, and in the 3rd lap he left the braking too late, “… and then I did some motocross racing through the gravel, damaging a tyre” as Lvov told later. Hahn now held his leading position unchallenged until the chequered flag, while Oestreich had meanwhile overtaken Janiec and mounted an attack on Albacete. In the closing stages of the race Oese succeeded in passing the Spaniard, thus securing 2nd podium spot. Behind Albacete, Levett finished in 4th, followed by Vrsecky, Lacko, Bösiger, Lvov, Janiec and Nittel. Later both Levett and Janiec incurred a 25-second penalty, dropping the Brit to 9th and the Frenchman to 11th.
In the team championship both races were won by MKR Technology (Bösiger / Oestreich), ahead of Truck Sport Bernau (Albacete / Levett) and Team Hahn Oxxo Racing (Hahn / Birnbauer)
90 minutes after the race the results were again corrected. Both Levett and Bösiger collected an overspeed penalty. For the Brit this meant another 25 seconds and for the Swiss 40 seconds, relegating the 2 drivers to 13th and 12th positions, respectively.