Truck-Grand-Prix 2021 canceled.
Event not feasible due to flood disaster. 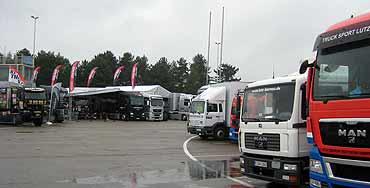 12. September 2008Zolder - After a marvellous Thursday with lots of sunshine and temperatures of more than 25 °C (77 °F) today reality caught up with the truck racers. It was raining continuously till late afternoon and the temperature was never above 16 °C (60 °F). For those teams who had their RaceTruck under canvas that was no problem; others tried to shelter from the steady rain under big sun umbrellas. But in spite of the rather frosty temperatures you could see that the pilots and the teams were tensed up. Just sitting around inactively all day made them feel restless. So they walked around hither and thither. Maybe some of them hoped to learn something interesting from their opponents. Anyway, many of them would have preferred to have the free practices today.
Now that David Patalacci – contrary to his announcement – had come to Zolder, too, and Xavier Mariezcurrena is fit to drive again after the rupture of his shoulder in Nogaro, the whole FIA squad will be gathered at the circuit again. In Zolder up to 30 trucks are allowed to enter the race, so there would have been enough vacancies for some guest drivers, but Erwin Klein Nagelvoort is the only registered race-by-race pilot.
Towards evening the sky lightened a bit, and everybody hopes that perhaps the weather services were mistaken – and it will stay like this during the whole weekend.