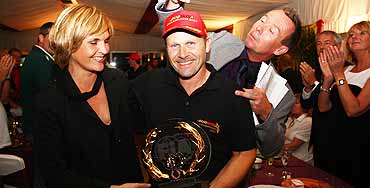 12. October 2007After all the bickering and incidents, especially during the weekend of the final, nobody was really in a festive mood at the FIA Championship celebration. The Cepsa Team ostentatiously stayed away from the event which was not well received by the other teams. Others had not even received an invitation, which nobody did understand either. Before the presentation of prizes permanent race Director Tony Iddon delivered a short speech giving a summary of the season, and he did not omit to bring up the unpleasant incidents – especially the ones that happened during the final day of this season. And he reasserted again the fact that makes truck racing different from many other motor sport series, namely that all the people involved in truck racing are one big family. And this family is endangered at the moment. And also Frédérique Trouvé, who, as FIA Commission Manager is not only in charge of truck racing, but also responsible for the FIA Touring Car and the FIA GT series, re-emphasized that she never experienced this family sentiment with any other race series.
Same as every year, none of the pilots went empty-handed. There was sustained applause and cheers for Frankie Vojtisek, who was back on the circuit in Jarama after his long convalescence. Although host Jonathan Reeves kept trying to encourage several drivers to make a brief speech, he was not really successful until he asked European champion Markus Bösiger. And Bösiger made a point of stating that his speech should be regarded as an open discussion within the much invoked family circle. Mario Kress translated Bösiger’s discourse a bit moderated into English, and Frédérique Trouvé did an almost simultaneous translation in French. The Swiss began his speech citing a sentence Cepsa allegedly said to Buggyra after the first race in Barcelona: “Maybe you’ve got the faster cars, but we have the better connections with the FIA”. Actually, almost everybody took this remark as a joke, but later on several decisions and some incidents that occurred during this season was food for thought. In particular Bösiger demanded a strict separation of FIA administrative jobs and the function of organizer or promoter.
Depending on the viewpoints of the audience there was either loud applause or almost awkward silence, before eventually the special awards were presented. Among others there was a trophy for the best team presentation in the paddock, relating to the overall picture including catering and all that’s involved with the presentation. The clear favourites were Team Allgäuer and Team Frankie, and in the end the Czechs were ahead by a nose. The Rookie of the Year award was collected by Jean-Philippe Belloc, and Jochen Hahn received a trophy, too, because, quasi as a lone fighter, he was the only strong Mercedes pilot who kept the flag with the three-pointed-star flying to the – at least for Hahn – bitter end. And the last of the trophies – a very special one – was awarded to David Atkins. As we all know, the longest-serving and – with 6 titles – most successful truck racing manager is going to emigrate to New Zealand. In addition to a shirt of his new home country he got a huge cartoon where the different stages of his long time career were pictured.
While the awards were presented, Egon Allgäuer expressed his dissatisfaction with the present situation in truck racing in a very special way. He celebrated “Weiberfastnacht” (Women’s Carnival) about three months before the carnival season and – amidst the laughter of the people present – he cut off the neck-ties of several of the FIA officials.