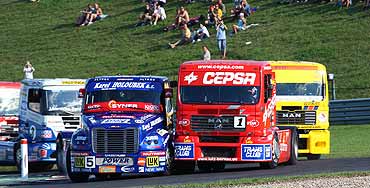 25. August 2007Most - A sapphire blue sky and temperatures of more than 30 °C (86 °F) on Saturday morning gave the word warm-up quite a new sense. Markus Bösiger in his Buggyra Freightliner set fastest time, closely followed by Antonio Albacete (MAN). But in the timed practice the Spaniard stepped on the gas and bettered his time by more than half a second (2:03.338), whereas Bösiger, inexplicably, lost more than a second compared to the warm up, resulting in a surprising 5th position on the grid. Ahead of him were his team mate David Vrsecky, Jochen Hahn (Mercedes Benz), and Gerd Körber (MAN).
However, in the Qualy race Albacete could not make use of his pole position; local hero Vrsecky made a great start and was instantly on first position and managed to stay there until he crossed the finish line. The Spaniard tried all the time to put pressure on the Czech, at almost every bend it looked as if the red MAN would pass the blue Buggyra, but as soon as the trucks picked up speed when coming out of the corner, Vrsecky pulled away.
Hahn met the same problem with Körber, who took away his third position right after the start. Glued to the rear of the Mercedes was Bösiger who – after only a few laps – managed to pass Hahn in the 180 degrees curve. A short time later the Swiss passed Körber’s yellow MAN, too. But the leading duo was already too far ahead for Bösiger to catch up. Hahn was now directly behind Körber and then began the most exciting fight of the race. The Mercedes pilot seemed to be a little bit faster, but try as he might to pass Körber, the MAN pilot fought him off successfully. As a result of the constant infight Jean-Philippe Belloc (MAN) could make up ground and crossed the finish line only half a second behind Hahn.
Then there was a similarly exciting duel between the two British “fighting cocks”, Stuart Oliver and Chris Levett (both MAN). Oliver’s truck had a severely damaged windscreen; nevertheless, he managed all the time to fight off his young opponent. In the penultimate lap, however, the two Englishmen clashed so violently, that eventually Oliver fell back on 12th position, whereas Levett crossed the finish line on seventh. On 8th position was Markus Altenstrasser, who had already swapped places with his Renault colleague, Ross Garrett, at the start. The top ten were completed by Jo Adua, whose team boss Egon Allgäuer seemed to be pursued by bad luck. After the warm up the differential of his truck had to be welded, and in the process caught fire – a spectacular sight, but not really dangerous. So the Austrian missed the timed practice and had to start the race from the back of the grid. After only two laps he had already left behind more than half of his opponents, but then he had to give up because of a mechanical defect.
And also the Cup race was ill-fated for Allgäuer. Again he had to start from the back of the grid and after only a few bends he had already passed eight or nine of his opponents, when the left front tyre of his truck went off the rim. Apart from that, the race was totally dominated by Antonio Albacete. With a clever stroke he took the lead from pole setter Vrsecky. And Bösiger, too, managed to pass his Czech team mate. Then he started to attack the Spanish title holder. Especially in the narrow bends the Buggyra was looming closely behind the red MAN, but the experienced pilot Albacete fought off the Swiss all the time and eventually crossed the finish line with a tight but sure victory.
Vrsecky was only a second behind the leading duo, but never had a real chance to get involved in the fight for the victory. For the rest of the field the positions were already established very early. Hahn held his 4th position unchallenged, after he passed Körber at the start, same with Belloc. Some seconds behind Körber was Chris Levett and then there was a large gap. Oliver, who started from 12th, had succeeded to work his way up to 8th position, on 9th was Altenstrasser, whose team mate Garrett had to give up in the 6th lap. This time, the top ten were completed by Andy Levett, Chris’ father.
Next there was a lengthy discussion about the protest the Buggyra Team had raised, as they claimed that Albacete went off the track at the start and clipped a marker. But in the end the protest was rejected. In the championship standing today Albacete moved 6 points closer to Bösiger, who, all the same, holds a comfortable lead. Albacete has got 245 points now, followed by Vrsecky with 219.