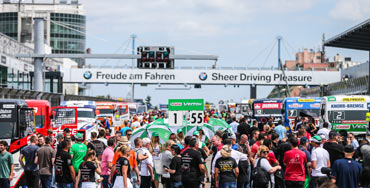 Truck Grand Prix This And That

04. July 2015Many of those at the 4th round of the FIA European Truck Racing Championship in Nogaro who’d grumbled about having to slog 1,300 km across France to the Eifel in just three days will have had to acquiesce to the imputation of having made much ado about nothing — after all, they’d all reached the Ring in the best of shape.
In actual fact the entire journey went off relatively problem-free. No traffic jams, no mishaps, but then no margin of safety either should there have been any delays.
Thankfully not one truck had come away from Nogaro with any serious damage, if you except the scratches that one or the other vehicle might have sustained when they were carted off in such haste. On the other hand some teams had decided against racing in Nogaro altogether – not least at the behest of their sponsors – to avoid the risk of not being race-ready for the Truck Grand Prix on the Ring, the climactic event of the season.
And then there were some teams that abstained, heavy-hearted, from the TGP because all members couldn’t manage to make it together to both events at Nogaro and on the Ring.
Which is why we think the performance of the French Robineau team, which was one of the last to arrive in the paddock, that much more noteworthy. At Nogaro the red MAN, driven by Thomas Robineau in the races of the French championship, had suffered damage to its steer axle and had to first be taken to its base workshop near Le Mans for a replacement axle. At the Ring, his brother Jérémy drove the No. 83 truck in the ETRC races while Thomas campaigned it in the Mittelrhein Cup, finishing on the podium in each of the three races - third, second, and first. The MAN had its engine running non-stop throughout, and came through the unrelenting strain without a murmur of complaint.
Dutchman Erwin Kleinnagelvoort, who’d raced at the FIA round in Nogaro in his Scania, showed that he’d lost none of his go, competing in the races of both, the ETRC and the Mittelrhein Cup.
Likewise Sascha Lenz seems not to have gotten enough of truck racing, going at all seven races plus practice and qualifying - and winning the Go & Stop challenge besides! The young German will have loved to have been in Nogaro as well, but his MAN was then still convalescing, so to speak, its entire chassis being reconstructed after the heavy crash in Misano.
Admittedly there weren’t as many trucks on the grid, at least in the ETRC races, as we’ve been used to. But the 114,000 spectators were nevertheless treated to splendid summer weather and taut truck racing. And when they weren’t marvelling at the trucks tearing past on the track, they were all over them in the paddock. The paddock at times was so jam-packed that there was just no getting anywhere.
The manufacturers and suppliers, who had set up their marquees and displays on the exhibition area in the infield, couldn’t complain about any shortage of interest either.
At one stand there was a wheel of fortune with prizes to be won. At times the queue in front stretched to way over 100 people, but nobody was in the least impatient.
That can’t exactly be said of the races of the ETRC.
MAN of the moment Norbert Kiss is marching inexorably towards his second consecutive championship. One more time he collected more points than the competition, stretching his lead in the championship by that much more - regardless of the fact that his pursuers had sworn to close the gap.
Jochen Hahn in particular had set out to accomplish much in his home races. But his final race, which should indeed have crowned a weekend of herculean effort, ended in fiasco right at the entry to the Mercedes Arena hairpin. Like it did for Steffi Halm, who was racing the MAN that originally was meant to be used as the doppelgänger for Hahn’s race truck at trade fairs and exhibitions. For both Germans it was end of story. Zero points.
Even the second lady in the field, Ellen Lohr, suffered a serious setback on Saturday when she and Czech Buggyra pilot Adam Lacko collided so spectacularly.
In fact, it didn’t go so well with the entire German contingent at their home Grand Prix. (With eight racers in all, they accounted for almost half the field.) Okay, leave Gerd Körber out, if you will - the race-by-race pilot finished on the podium twice in his Schwabentruck Iveco.
We recommend the 13 minute TRO roundup of the TGP on truckrace.tv for everyone who’d like to relive all the action once again.
Finally, some of the British teams will carry home an altogether unpleasant memory of Truck Grand Prix 2015, though not of their time at the Ring. With 14 trucks – in the Mittelrhein Cup – the Brits were the single largest nation represented here. Those who wanted to drive home via Calais were caught in the ongoing strike by the ferry workers, which had a cascading effect on operations through the Eurotunnel, bringing hop-on-hop-off services beneath the Channel to a standstill time and again. The strike is expected to continue till Monday. Meanwhile, according to information with the DVZ Deutsche Verkehrs-Zeitung, the queue of trucks waiting to cross now stretches more than 100 km across France almost till the Belgian border. In scorching heat, with temperatures far in excess of 30°C. 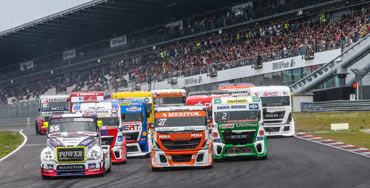 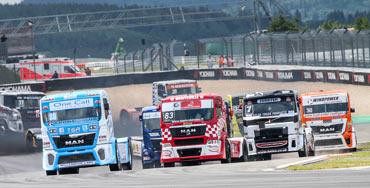 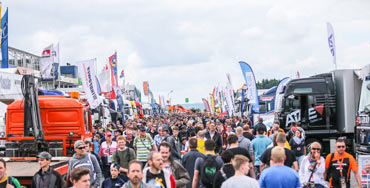