28. June 2015Nürburgring - It took a while for Sunday’s first race to get going, what with all the festivities on the grid — the customary grid walk open to everyone, the group photograph of the FIA pilots, the trike parade, an appearance by tankpool24’s bodypainted models, a brass band, and what have you.
The weather was ideal – the ambient temperature read 20° and the track surface 41° – and the fans were loving it, savouring every moment that allowed them to get up close to those magnificent men (and women) in their racing machines.
When the lights turned green, polesitter Kiss cannonballed into the Mercedes Arena with Lacko alongside, Albacete right behind Kiss and Hahn to the Spaniard’s left. As the trucks swept into the corner and Messrs Lacko, Albacete, and Hahn refused to give an inch, a collision was unavoidable. Kiss and Vršecký seized on the opportunity to zoom ahead, while Hahn and Lacko lost out majorly, having to take up the chase from almost the end of the field.
Behind the leading twosome there was almost constant jockeying for position between Halm, Körber, Reinert, and Albacete, till the Spaniard pulled out a gap and went on to finish third.
Fourth place was bitterly fought for till the flag, and Hahn meanwhile had inserted himself into the equation. And whereas it looked for a while like Körber was certain of finishing in this position, the Iveco seemed to lose power gradually and was presently overtaken by truck after truck till all that was left for the pilot from the Rheinau was seventh place.
Ahead of him, though, the battle was close. Reinert eventually crossed the line in fourth, a nose ahead of Hahn, who himself finished just half a second ahead of Halm.
Lacko’s consolation, and a big one at that, was eighth place and the pole position for the concluding race that it brings with it. The two final points places were taken by Janiec and Vojtíšek.
Team Lion Oxxo (Kiss / Janiec) was the top team, ahead of Buggyra (Vršecký / Lacko) and Reinert Adventure (Hahn / Reinert). 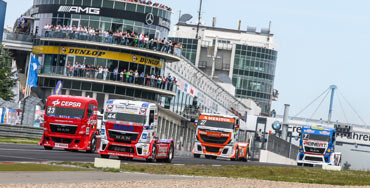 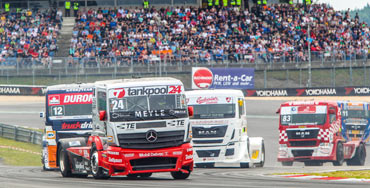 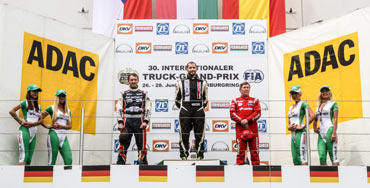