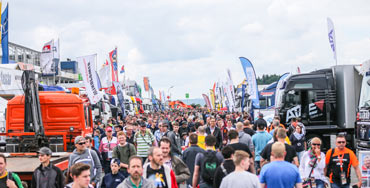 28. June 2015Nürburgring - The sky was clear and the temperature a bracing 15°C when the trucks rolled out at 8 am for the second warm-up at the Truck Grand Prix, the 5th round of the FIA European Truck Racing Championship. This time, surprisingly almost, it was not Norbert Kiss (MAN) who was quickest but the Buggyra Freightliner pilot Adam Lacko (CZE). Not only that, even Spaniard Antonio Albacete and German Jochen Hahn (both MAN) were faster than the reigning champ from Hungary.
But Kiss set the record straight in second qualifying.
His 1:53.931s put him at the top of the timesheet, albeit by barely seven-hundredths ahead of Hahn. Once again most of the racers, including the two ladies, pitted promptly after their first flying lap. Kiss and Hahn were joined in the SuperPole by Lacko, Albacete, Czech David Vršecký (Buggyra Freightliner), a German quartet consisting of Steffi Halm, René Reinert, Ellen Lohr (all three MAN) and Gerd Körber (Iveco), and finally MAN pilot Anthony Janiec (FRA).
Like yesterday, Janiec will surely have questioned whether he should have pulled off so prematurely - because the three MANler Sascha Lenz (GER), Frankie Vojtíšek (CZE), and Jérémy Robineau (FRA), and the two tankpool24 Mercedes drivers Roland Rehfeld and André Kursim (both GER) stayed out on the track till the final second, throwing all their efforts into taking his place in the top 10.
In vain. As it turned out to Janiec’s intense relief, none of them could improve their times.
In the SuperPole four race trucks went under 1:53 in their first flying lap — Lacko the leader with 1:53.542s, Kiss two-hundredths behind, Albacete and Hahn bringing up the rearward. But then Kiss went one better and thrust Lacko from pole position for Sunday’s first race by eight hundredths.
Albacete and Hahn took third and fourth, ahead of Vršecký, Reinert, Halm, Lohr, Körber, and Janiec. 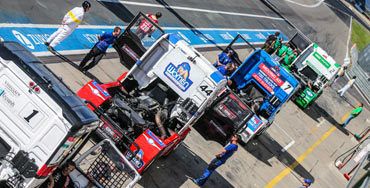 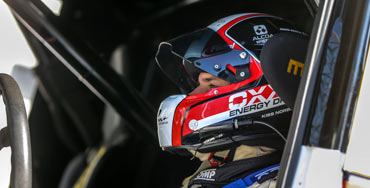