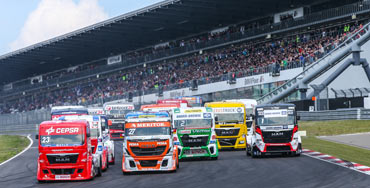 27. June 2015Nürburgring - The sky had cleared considerably and the temperature was comfortably floating above 20°C at the start of today’s second race. But it was a clouded end to Ellen Lohr’s race a few hundred metres after the start, and the grande dame of truck racing will have found the goings-on around her anything but agreeable.
The start itself was unexceptional. Albacete and Körber went side by side into the Mercedes Arena, with the rest of the pack in hot pursuit. This hairpin is a major hazard especially during the second race, but this time the entire field cleared it without incident.
Two hundred metres further, in the middle of the uphill section, there was a collision between Lohr and Lacko. The German’s MAN lifted and then dropped heavily back onto the track, coming to a rest in the runoff unable to be steered anymore. Race control decided to let the race proceed; the yellow flags were waved in one of the principal overtaking zones.
Albacete continued to pull away from Körber till at the flag he had a lead of over six seconds. Körber, for his part, was busier watching his rear than trying to attack. The man from Rheinau had to call on all the experience of a quarter-century of truck racing to defend his second place.
It looked like the whole competition had latched onto the Iveco’s rear crash beam, and not only Vršecký, who finished third - even Hahn, Kiss, and Lacko. At the finish a mere two seconds separated the second from the sixth.
Two seconds later teammates Reinert and Halm crossed the line side by side. Initially it was Steffi who was listed on the monitors in seventh, but when the results were officially released Reinert’s name was there with a three-thousandths advantage.
The Czech Frankie Vojtíšek was ninth. The TGP is the MAN pilot’s first race outing this season, and he collected his first two points here at the Ring. Frenchman Anthony Janiec took the final point.
The German racers – Körber excepted – really had very little going for them today. Shortly after Lohr, Rehfeld had to throw in the towel with a cracked brake disc. His tankpool24 teammate André Kursim finished 14th behind Lenz.
Buggyra (Vršecký / Lacko) was once again the top-scoring team, ahead of Team Bernau-Albacete (Albacete / Lohr) and Reinert Adventure (Hahn / Reinert).
Kiss now has 289 championship points, Lacko 225, Hahn 217, Albacete 173, Vršecký 171, and Reinert 105. 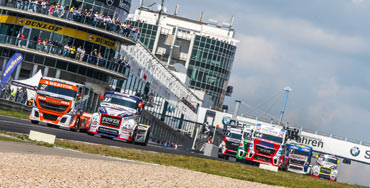 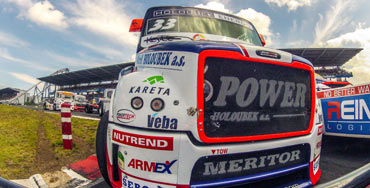 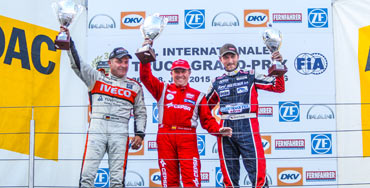