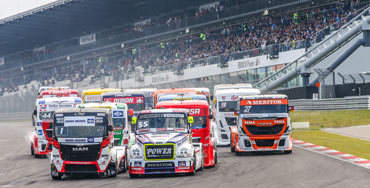 Saturday at the Nürburgring Part 1 – Kiss resumes his victory parade

27. June 2015Nürburgring - The track was still very wet during warm-up for the opening race at the Truck Grand Prix on the Nürburgring, the 5th round of the FIA European Truck Racing Championship. There had been a heavy shower overnight - indeed, a storm with squalls had been forecast. And so, at around midnight, many of the tents were secured with additional moorings and most of the banners were taken down.
But then it didn’t turn out quite as badly as everyone had feared, and right on time for the first race the sun was peeping out through the clouds again.
There was little to infer from the lap times in the warm-up, which were up to 20 seconds slower than those in qualifying yesterday. But the asphalt continued to dry out and at the end it was Norbert Kiss (MAN) – but naturally – who set the quickest time. You can’t escape the impression that the Hungarian is hardwired to drive at only maximum speed.
Kiss had already secured pole position yesterday, and any result other than victory would have been a surprise.
In the event, Kiss led into the sharp corner at the entry to the Mercedes Arena, with Czech Adam Lacko (Buggyra Freightliner) in his draft, tailed by the two MAN pilots Jochen Hahn (GER) and Antonio Albacete (ESP) and then the rest of the field.
Hahn and Albacete tangled even before they’d reached the final corner of the truck race loop, allowing the leading duo to pull out a gap. Hahn set off again in hot pursuit of Lacko and did catch up, but couldn’t find any opportunity to overtake. The podium places were thus decided rather early in the race.
The real action was unravelling just behind. Albacete was clearly struggling with a brake problem, which Buggyra Freightliner pilot David Vršecký took full advantage of - to finish fourth for the umpteenth time this season.
René Reinert and his teammate Steffi Halm (both MAN) followed the Czech home in fifth and sixth, ahead of compatriot Gerd Körber (Iveco). Albacete managed to salvage eighth place, and with it pole for Saturday’s second race, which the first eight finishers must start in reversed order.
The final points places went to the German Ellen Lohr und Frenchman Anthony Janiec (both MAN).
As loudly as the hordes of fans on the stands roared them on, the three remaining Germans – Sascha Lenz (MAN) and the two tankpool24 Mercedes pilots Roland Rehfeld and André Kursim still couldn’t make it into the points, finishing 11th, 13th, and 14th respectively. 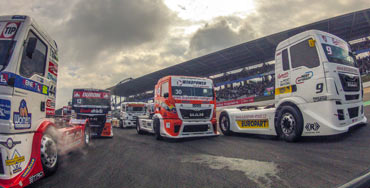 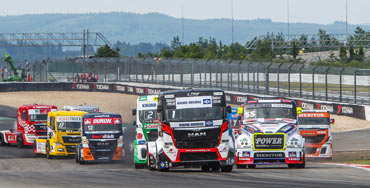 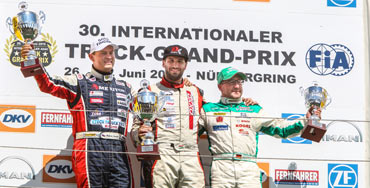