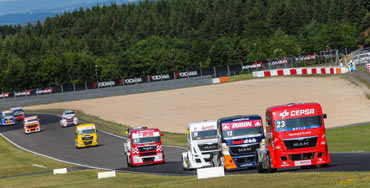 Friday at the Nürburgring

26. June 2015Nürburgring - If only the weather could stay this way — the one unanimous wish on this, the first day of action at the Truck Grand Prix, the 5th round of the FIA European Truck Racing Championship on the Nürburgring. The ambient temperature was an agreeable 20°C-plus, even when it clouded over in the afternoon — but most importantly it was dry.
The morning’s free practice sessions played out unexceptionally. Defending champ Norbert Kiss made it clear that he has every intention of continuing his string of successes at the Ring. Seemingly effortlessly, the Hungarian drove his MAN to the top of the timesheet on his first flying lap. But times in practice are rarely definitive; you never know if anyone is really playing his or her hand.
In afternoon’s qualifying a clearer picture began to emerge.
Spaniard Antonio Albacete was quickest in his MAN with a lap of 1:54.831s, which nevertheless was a good 7/10ths slower than Kiss’s time in free practice. The top drivers, as they now customarily do to conserve their tyres, all returned to the pits after one hell-for-leather lap apiece, confident that they’d made it into the SuperPole.
French MAN pilot Anthony Janiec was another against whose name the “Pit In” indicator lit up rather early in the session. He was 10th at the time, and at the end of the session came very close to being knocked out by his two MAN colleagues Jérémy Robineau (FRA) and Frankie Vojtíšek (CZE), whose times were both within a tenth of Janiec’s.
Besides Albacete and Janiec the others who qualified for the SuperPole included Kiss, the two Buggyra Freightliner pilots Adam Lacko and David Vršecký (both CZE), and a German phalanx consisting of Jochen Hahn, Steffi Halm, Ellen Lohr, René Reinert (all MAN), and Gerd Körber (Iveco).
Kiss was again well ahead of the competition in the shootout, his lap of 1:53.776s being the only one under 1:54s, although Lacko, Hahn, and Albacete were all within 5/100ths.
Vršecký and Reinert took the third row on the grid, followed by Halm, Körber, Lohr, and Janiec.
Then it was time for fun.
The Go & Stop competition, in which participants must accelerate their trucks to top speed and then brake to a stop exactly at a point marked on the track, was won by German driver Sascha Lenz in his race MAN. Lenz Junior was in fact one of the busiest pilots today - and he took the Go & Stop crown despite also taking part in practice and qualifying for both, the ETRC and the Mittelrhein Cup. 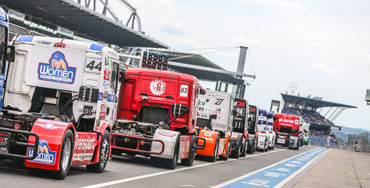 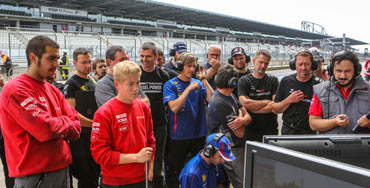