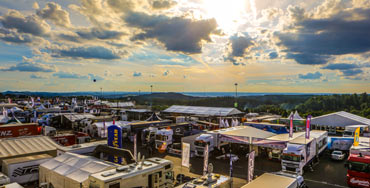 25. June 2015Nürburgring - Leaving a hot summer weekend – the finest holiday weather – in the southwest of France behind, the truck racers dashed to the Eifel only to be greeted by an overcast sky, a steady drizzle, and temperatures in dismal single digits.
The Truck Grand Prix on the Nürburgring, the 5th round of the FIA European Truck Racing Championship, is a four-day event, beginning with the taxi rides for the press and VIPs and the subsequent one-hour supplementary practice session. The weather was much more cheerful today, and everyone is optimistic that things will stay this way.
There are 17 trucks in the fray for the ETRC races, and 28 for the Mittelrhein Cup. More than half of the latter are from Britain - these races have been part of the British championship for as long as we can remember.
The fans at the ETRC races will be rooting for their hero Jochen Hahn (MAN) to narrow the gap in the championship to Hungarian MAN colleague Norbert Kiss, the hitherto unchallenged leader.
Steffi Halm made a splash on her return to the ETRC only a week ago, and the many fans of the young German will naturally be wishing her as much success in her home race as she had in Nogaro.
With eight pilots, male and female, more than half the ETRC grid will be German. And again, like much of the rest of the field, a majority will bear the marque of a MAN - René Reinert, Sascha Lenz, and Ellen Lohr besides Hahn and Halm.
The MAN dominance notwithstanding, other notable brands will also be strongly represented. For one, “Mr Truckracing” Gerd Körber in his Schwabentruck Iveco is going to be no pushover. And the plucky tankpool24 Racing Team will once again campaign two Mercedes trucks, driven by Roland Rehfeld and André Kursim.
Kiss was quickest in practice, but then today’s lap times really shouldn’t be overrated. In principle, this session serves more as a testing opportunity.
The racers will get going in earnest tomorrow with qualifying and the SuperPole.
As always, the TGP is much more than truck racing, more than motorsport up close for the entire family. It’s also a truck industry show, trade fair, and – most importantly for the many who make the trek here from all over Europe – the year’s biggest trucker festival. All rolled into one.
The fun starts on Friday evening in the Müllenbachschleife. The excitement builds through Saturday to a climax in the legendary fireworks after the second concert.
All this you can only experience if you are at the Ring in person. For those who can’t make it, the racing will be streamed live over the Internet on the Website of German TV channel SWR. 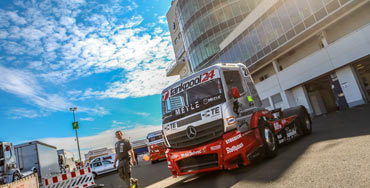 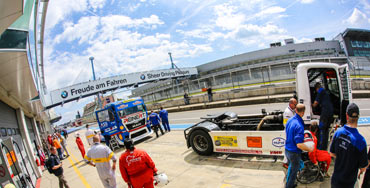 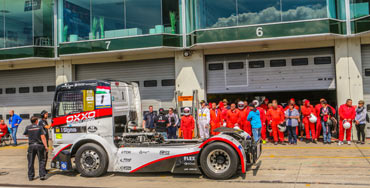