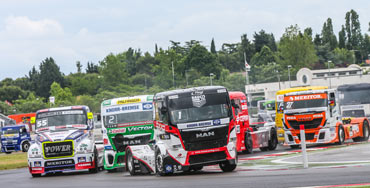 Sunday in Misano Part 2 – Kiss hurtles into the horizon

24. May 2015Misano - The title of this report is to be understood absolutely literally. But before the Hungarian could get the better of the competition, everything pointed to another rainy race. Even the obligatory TRO autograph session was washed out. By the time when the trucks started lining up on the grid for the start, however, the spectre had whisked itself away.
Kiss had such an enormous advantage at the very start of Sunday’s first race that the outcome was decided right there — should nothing untoward occur later on. Nothing did, and the unstoppable Hungarian was, well, unstoppable.
Second-place was hotly contested. Lacko kept up his attacks on Hahn right till the finish line but had to settle for third.
The three-way battle for fourth place was close throughout, even if Albacete was able to pull away some from his pursuers Körber and Vršecký. The German truck racer, for his part, was able to salvage fifth by only 14 hundredths from the hard-charging Czech.
Janiec and Reinert fought tooth and nail for seventh till about midway through the race, when the Frenchman was called in for a drive-through penalty that dropped him out of the points. Behind this MAN-on-MAN duel the all-Renault rivalry between the two Portuguese Josés Teodosio and Rodrigues had erupted into an all-out dogfight. Rodrigues had managed to overtake his compatriot halfway through and – after Janiec’s relegation – appeared comfortably on course for an eighth-place finish, and with it pole for the weekend’s final race…till Janiec roared back into the attack. Within one lap the Frenchman had fought his way back into the points and was now threatening to topple Rodrigues. But the Portuguese’s advantage was enough to keep him 4/10ths ahead at the finish.
Teodosio took the final point available.
The tankpool24 team had harboured justifiable hopes of scoring again, the two Mercedes within sniffing distance of the points throughout. But in the end 12th and 13th were all Roland Rehfeld and André Kursim (both GER) could muster.
The team podium had Oxxo-Lion (Kiss / Janiec) on the top step, with Reinert Adventure (Hahn / Reinert) and Buggyra (Vršecký / Lacko) second and third. 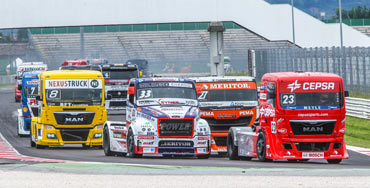 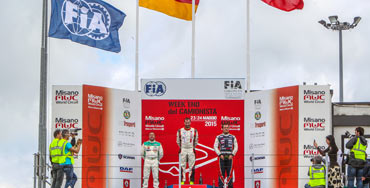