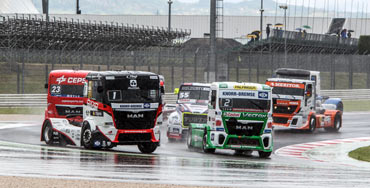 23. May 2015Misano - Not long after the SuperPole it started to rain again, heavy showers alternating with light drizzles. A direct consequence was that the now obligatory autograph session outside the TRO tent had to be curtailed somewhat.
On the other hand, the trucks were held in parc fermé for longer than usual. Only 15 minutes remained for service and setup, and the teams were livid. What they didn’t know, though, was that the opening of the pit lane kept getting pushed back. We were now 1,5 hours behind schedule. But then there was a sudden rush of activity.
And so the trucks lined up on the grid post haste.
As the rain grew heavier there were two formation laps, and the race was started under yellow flags. The racers dutifully fell into line, lapping in the order in which they’d qualified. And if nobody made a major mistake or let his or her guard down, the race would – or so it appeared – end the way it had begun. But then polesitter Kiss probably mistimed his braking a bit at the end of the long straight, allowing Hahn and Lacko to pass him.
While Hahn quickly pulled away from there to victory, Kiss kept trying to get around Buggyra pilot Lacko, weaving left and right in his impetuous determination to get ahead. But the Czech was having none of it and that was that.
Albacete finished fourth ahead of Vršecký and Janiec. In a solitary drive in seventh place – with yawning gaps before and behind him – followed José Rodrigues. Pole for the second race alongside the Portuguese went to MAN pilot Jérémy Robineau (FRA), who was trailed to the flag by Lenz and Mercedes driver Roland Rehfeld (GER), who opened his account for the tankpool24 team with his 10th-place finish.
The second tankpool24 Mercedes driven by André Kursim (GER) retired after the first formation lap with electrical failure. Körber’s race too ended prematurely in the pits.
Buggyra (Vršecký / Lacko) finished on top in the team standings, ahead of Reinert Adventure (Hahn / Reinert) and Team Oxxo Lion (Kiss / Janiec). 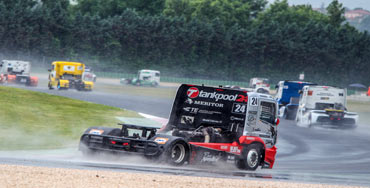 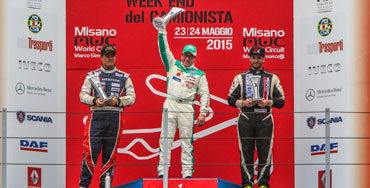