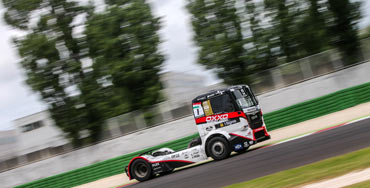 23. May 2015Misano - It had rained for more than 24 hours continuously in Misano Adriatico, and the paddock, pit lane, and track were all under water, in some places a few centimetres high. Fears were voiced that there would be no racing at all on the first day in Misano - given that the recently resurfaced track still lacks adequate grip.
But everything looked different once again this morning. For sure it wasn’t entirely Misano-like, but it wasn’t raining anymore. Even so, the track was still somewhat treacherous in places. And, as you might expect in such conditions, there were several spins especially in second free practice, one of them with dramatic consequences.
It all began when Frenchman Jérémy Robineau came off the track in his MAN, smashed into the barriers, and rebounded onto the grass. That brought the yellow flags out. Then Ellen Lohr (GER) spun at the same spot and also landed in the grass. As she coaxed her MAN back onto the track, another MAN, the one driven by Eduardo Rodrigues (POR), swerving in an evasive manoeuvre hit the barrier in the same place as Robineau earlier. Now it was red flags.
The action resumed 20 minutes later.
The practice session had already closed when Portuguese José de Sousa spun at the entry to the final straight. MAN pilot René Reinert, who was right behind him, braked severely and swerved, right into the path of Lohr, who ploughed into his truck at full tilt, her MAN coming to rest astraddle Reinert’s. That was some sight, but thankfully the protagonists walked away without a scratch.
Both teams are hoping that the trucks will be race-ready again by tomorrow morning.
The accident demonstrated once again just how safe these 5 tonne missiles really are.
Qualifying began with a delay, and with only 12 trucks. Ten minutes before the close two more trucks rolled out, among them the Renault of Portuguese José Teodosio, and seven minutes later two more, including another Renault of another Portuguese José, this one Rodrigues. These two promptly unsettled some of the drivers down the timesheet who were struggling to make it to the SuperPole.
The top 10 for the shootout included the two MAN pilots Norbert Kiss (HUN) and Jochen Hahn (GER), the two Czech Buggyra pilots Adam Lacko and David Vršecký, and Spanish MAN driver Antonio Albacete, Gerd Körber (GER) in an Iveco, Frenchman Anthony Janiec (MAN), Teodosio, José Rodrigues, and Sascha Lenz (GER) in an MAN.
In the SuperPole it was Hahn who set the best time, only to have Kiss undercut him by all of 26 thousandths. At the close the Hungarian did one better, putting a good half-second between himself and Hahn with a lap of 2:01.689s. Lacko and Albacete will occupy the second row on the grid, ahead of Vršecký, Körber, Teodosio, Janiec, José Rodrigues, and Lenz. 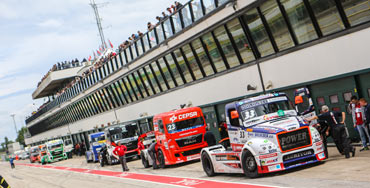 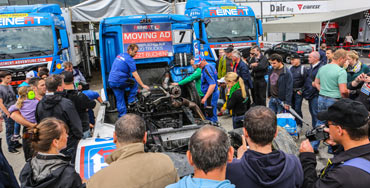