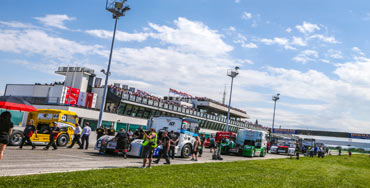 20. May 2015Following each race weekend of the FIA European Truck Racing Championship, readers of truckracing.de/truckrace.info usually find a post-event report up here a few days later. This time, considering there’s only a few days between the second round of the ETRC at the Red Bull Ring in Austria and the third round at the Misano World Circuit on Italy’s Adriatic coast, a combined ‘This and That’ report for the second and third rounds will be put up after the Misano weekend.
Most of the teams made their way to Italy directly from the Red Bull Ring — many, indeed, to the circuit itself, where a staging area in front of the actual paddock zone has been prepared for them with water and electricity connections and access to the toilets in the paddock.
The beaches of Misano Adriatico and Cattolica are nearby, Rimini is a few kilometres up the coastal road, and those with an exploratory bent always find the short trip to San Marino very interesting. Misano, which has often been the season-opening round of the FIA ETRC, is one of the most popular destinations for the truck racing community and has been, for as long as we can remember.
Venice once again presented an irresistible attraction for some of the teams, who peeled off to visit the city of lagoons.
But now truck racing is back at the top of every mind here. In fact, the Misano event has really always been about trucks — and anything that has to do with trucks.
The Autopromotec exhibition is taking place in Bologna concurrently. A number of sponsors from the FIA ETRC are participating in this trade fair for automotive equipment and aftermarket products, and many of those are expected to make a trip to the Misano World Circuit, situated less than an hour away by road.
Nineteen drivers and trucks have registered. Of the FIA full-season pilots only Scania driver Erwin Kleinnagelvoort (NEL) isn’t going to be racing here. On the other hand, there will be eight race-by-race pilots in the fray.
Germans Gerd Körber (Iveco) and Sascha Lenz (MAN) featured on the Red Bull Ring; they will be joined by three Frenchmen – Michel Bassanelli and Alain Treuvey (both DAF) and Jérémy Robineau (MAN), who are using the exposure as part of their preparations for the French championship (which Jeremy’s brother Thomas will be racing in) – and the Portuguese Josés Rodrigues, de Sousa, and Teodosio. The three Josés, who will be racing their Renaults in the French championship, are known to want to make a couple of sorties in the FIA ETRC as well.
The competition between José Rodrigues and his father Eduardo (MAN), who is a full-season participant, promises to develop into an especially interesting duel. In the recent past José has usually been a tick, or even two ticks quicker.
The weather forecast is, unfortunately, not entirely Adria-like. The fact that the racing here is so wildly popular is mainly because of the relaxed holiday atmosphere, and we’ve always been spoilt with an abundance of sunshine. Whatever the case, both Saturday and Sunday are expected to remain largely dry. 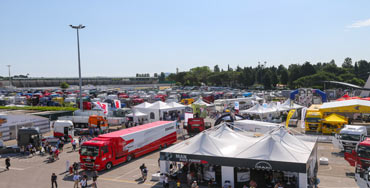 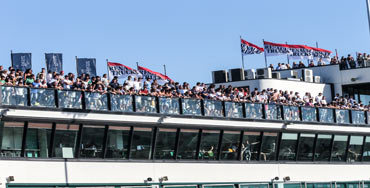