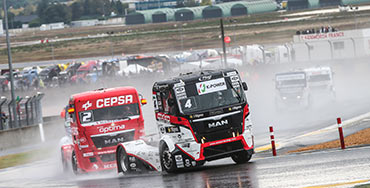 12. October 2014Le Mans - Kiss is king with 396 points following his win in the first race, and Albacete got Truck Sport Bernau the points they still needed for the team title.
Although it looked like the skies would clear up after this morning’s showers, the drops started falling again during the formation lap. And when the race control decided to run another formation lap and then start the race under yellow flags, meaning no overtaking in this critical phase, the result was as good as predetermined.
The trucks lapped Circuit Bugatti like motley pearls on a string.
The field was spread wide apart after the first lap, ex-champs Albacete and Hahn following Kiss at a distance in the remaining podium places. The two Buggyras of Vršecký and Lacko trailed them home unhurried in a second cluster. Sixth place went to Anthony Janiec, who’s performed extremely strongly here in Le Mans, ahead of the duo of Reinert and Bösiger. With his eighth-place finish the Swiss has pole for the concluding race of the 2014 season.
Vojtíšek und German race-by-race pilot Gerd Körber (Iveco) were ninth and 10th.
The prize for top team went to OXXO (Kiss / Major), ahead of champions Truck Sport Bernau (Albacete / Bösiger) and Buggyra (Vršecký / Lacko).
In the overall standings the focus is now on the battle for second place. Hahn at 375 is just four points ahead of Albacete, but the German starts ahead of the Spaniard and is going to do his utmost to finish that way.
The two long-time rivals are followed by Lacko (304), Vršecký (246), and Bösiger (231). 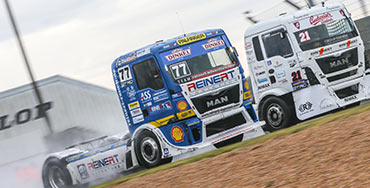 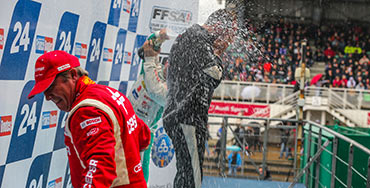