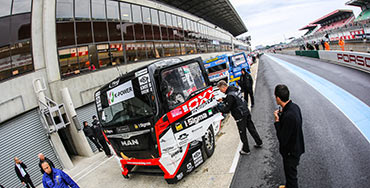 12. October 2014Le Mans - Rain on the dot of seven brought in this final race day of the FIA European Truck Racing Championship’s 2014 season. Of course everybody expects the weather in Le Mans in October to be unpredictable, and prepares accordingly. It was quite chill, but there was no danger of the track icing over like it last did 11 years ago.
The rain stopped in time for the early morning warm-up, but the track was naturally very slippery, not very much better than after the mist yesterday had lifted. And so Hungarian Norbert Kiss’s (MAN) timesheet-topping 2:26.903s was at best comparable with his best practice lap yesterday. The asphalt appeared as devoid of grip even in second qualifying over an hour later — going by the lap times. But now Spaniard Antonio Albacete (MAN) had his nose ahead, with 2:26.069s.
The remaining slots for the SuperPole were taken by Kiss, MAN pilot Jochen Hahn (GER), Czech David Vršecký (Buggyra Freightliner), Frenchman Anthony Janiec (MAN), the second Buggyra pilot Adam Lacko (CZE), the three MAN drivers Markus Bösiger (SUI), René Reinert (GER), and Frankie Vojtíšek (CZE), and José Rodrigues (POR).
Kiss set the best time of the SuperPole early on, till Albacete went to the top on his last lap. Everybody was convinced that this would be it, but Kiss was still out on the track and the Hungarian struck back immediately with a lap of 2:24.535s to snag pole by more than seven tenths.
Vršecký and Hahn will occupy the second row, followed by Janiec, Lacko, Bösiger, Vojtíšek, Reinert, and J. Rodrigues. 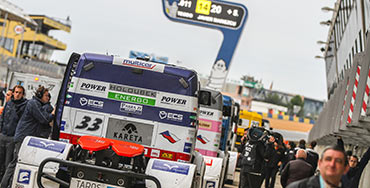 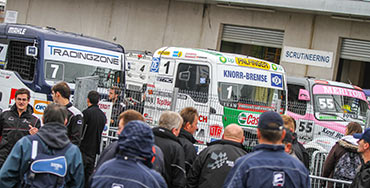