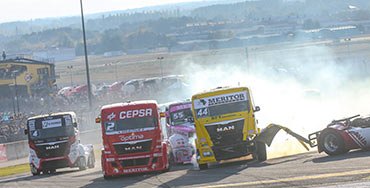 11. October 2014Le Mans - The first championship of the season seemed to have been in the bag. Truck Sport Lutz Bernau with Antonio Albacete and Markus Bösiger were already celebrating their successful defence of the team title, before a turn of events cruelly snatched it out of their hands.
But first things first.
The race had gotten off to a turbulent start. Accelerating towards the first chicane, polesitter Steffi Halm seemed to be losing ground to Janiec, but then both trucks headed to the chicane side-by-side. The Lion lady had the inside line, but her truck was nudged by Lacko’s and, lifting off the ground momentarily, looked like it was going to leave the track. But then it pelted straight ahead, as if out of control, right into the rear of Janiec’s MAN, which was just into the corner, swinging it around more than 180° till it came to a halt at right angles to the traffic. The ensuing tohubohu threw the front of the field into disarray. Halm dropped down to midfield, Janiec was overhauled by the entire pack. While most of the trucks behind were either braking hard or swerving to avoid the holdup, opportunistic third-place starter Bösiger had managed to latch onto his perfect racing line and, taking advantage of the dust haze, shot out ahead of Lacko, Albacete, Kiss, Vršecký, and Hahn.
A little further on Kiss clobbered Albacete, spinning the Spaniard around. Albacete took up the chase from the rear of the field, subduing Janiec in the final lap to take 10th place and with it one point towards the driver’s championship and two for Truck Sport Bernau.
Far ahead, victory beckoned Swissman supreme Bösiger, with Lacko and Kiss headed for second and third. Hahn had moved ahead of Vršecký on the second lap, and was pecking at Kiss’s heels but could find no way past the Hungarian hotshot.
Vršecký was trailed at a distance by Vojtíšek and Reinert, who were engaged in their own battle for sixth, the Czech gaining the upper hand at the finish. Portuguese José Rodrigues drove home undisturbed in eighth, ahead of Lohr and, as aforementioned, Albacete.
Buggyra (Vršecký / Lacko) was the top-scoring team ahead of Truck Sport Bernau and Reinert Adventure.
This was how things stood at the prizegiving ceremony and for some hours later, although it was noised about that the race commissioners were looking into some track incidents.
Top of their agenda was the collision between Kiss and Albacete. A penalty for the Hungarian would have had massive consequences on the championship standings. But they were also examining the attack on Steffi Halm at the start. In the event, both were passed off as normal racing incidents. That’s why the announcement – after 9 pm mind you – that Bösiger was to be punished for having taken undue advantage of the chaos at the first chicane to cut across outside the track, was a bit inexplicable.
Lacko was named winner ahead of Bösiger, and Reinert got 30 seconds added to his elapsed time, which promoted all those behind him by one place in the classification.
Truck Sport Bernau had to surrender its points, and can now theoretically still be beaten by Buggyra. The celebrations will now have to wait till Sunday.
With 376 points, Kiss has extended his lead to 13 points over Hahn (363), who is followed by Albacete (356), Lacko (296), Vršecký (236), and Bösiger (228). 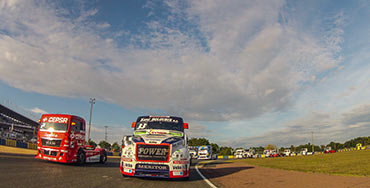 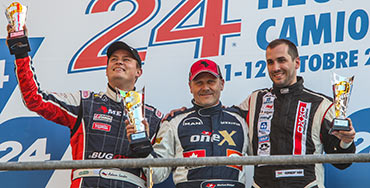