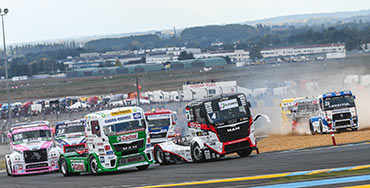 11. October 2014Le Mans - At the start of the first race there was no delay anymore in the timetable. Gerd Körber’s Iveco was missing from the grid, the German’s Schwabentruck having picked up damage to its engine during the SuperPole. The start itself was trouble-free, but then there was a hefty collision only a few hundred metres down the track, before the first chicane. Steffi Halm’s and the Portuguese José Teodosio’s (Renault) coming together landed them both in the gravel trap. Tedosio managed to wriggle out of his predicament, but with more gravel and sand on the track than in the trap the race was stopped immediately.
The field regrouped on the grid for the restart while a whole host of marshals got to work cleaning up the mess. Even with the help of a road-sweeper truck, it took an eternity. The race was restarted when it actually should have finished.
Reinert had damaged one of his tyres and visited the pits for a change, which entailed that he start from there as well.
Everybody was outstandingly well-behaved at the second start. As polesitter, Kiss duly eased into the lead and had soon opened out a gap over the rest, his pursuers spread out at somewhat similar intervals one behind another. While Kiss, Hahn, and Albacete hurtled inexorably towards their podium spots, Vršecký, Lacko, and Bösiger behind them evinced no appetite for attack and settled down in their positions till the finish. Janiec trailed them unthreatened in seventh. Behind him, however, it had gotten interesting. Here the battle wasn’t for the last points places but for pole position for the next race. In the end it was the Lion MAN that came out with its snout ahead. Having slipped down the ranks in the early laps, Steffi Halm came roaring back in her yellow truck to pin down the coveted pole.
The two final points places went to Reinert, who’d clawed his way up the rear-half of the field, and his German compatriot and MAN colleague Ellen Lohr. But Lohr was then handed a 30 second penalty, which promoted Teodosio into the points.
OXXO Racing (Kiss / Major) was the top team, followed by Truck Sport Bernau (Albacete / Bösiger) and Reinert Adventure (Hahn / Reinert).
Kiss now takes a 12-points championship lead over Hahn into the second race. 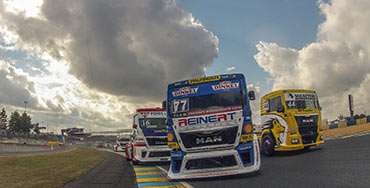 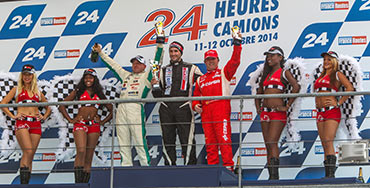