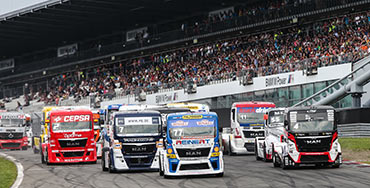 20. July 2014Nürburg - Shortly before the start of the final race of the weekend there was an official storm warning. That didn’t in the least worry the 170,000-plus avid spectators, who were rewarded with some pulsating action on the track even as the threatening storm made itself scarce.
Major on pole and Reinert alongside — the makings of a thriller? Not really, not for Reinert at any rate. The two had another nasty run-in, at the very place where they’d come together the previous day, in the apex of the curve in front of the Mercedes Arena. Again it was Reinert who came off worse, so much worse in fact that he had to park his MAN trackside a few hundred metres ahead. Bösiger’s MAN was caught out and the Swiss could only take up the chase once the rest of the field had swept ahead. Kiss’s MAN, the third truck involved in this meeting of MANs, escaped largely undamaged and the Hungarian was able to continue his race, albeit now from the midfield. Both, Bösiger and Kiss, went on to deliver epic drives — the Swiss stager all the way up from the rear into the points; the Hungarian from within striking distance.
Lacko meanwhile had taken over the lead, followed by Albacete. The two of them tore around the Ring in a mad pursuit all their own. Major in third kept dropping back till he had to deal with a resurgence from his rear. Overtaken by Vršecký on Lap 5, the Hungarian teen then had Hahn on his tail for the next four laps till he finally appeared to have been dispatched by the combative German at the exit of the Mercedes Arena. (All along, Kiss had been gaining ground and by this time was in sixth.) Hahn was on the outer line going into the gentle right-hand curve, and had just gone clear of Major when the two trucks touched. As both MANs thundered side by side towards the turn into the abbreviated loop of the Ring, Kiss was lurking right behind them. Hahn and Major got into another scrape, which forced the German straight ahead and brought the Hungarian to a halt. Kiss was now into fourth, with Körber in tow. Major blended back into the traffic in sixth, while Hahn was now way down in midfield. Over the last third of the race, the bantam from Altensteig clawed his way up to eighth place behind the Czech Vojtíšek (MAN). The last two finishers in the points were Janiec and Halm.
So much for the finishing order. But then the race directors had their say.
Vršecký was given a 30-second penalty added to his elapsed time for overtaking under yellow flags. This dropped the Czech to eighth, promoting Kiss to third place on the podium. But that wasn’t all. Rumours swirled the whole evening, and it was more than two and a half hours after the finish when a revised timesheet was issued, signed by the members of the race commission.
In the final official result Major and the Portuguese José Teodosio (Renault) were both penalised 30 seconds, which dropped Teodosio from 15th to 18th, but that had no bearing on the points. Major, however, now found himself in 14th, out of the points. All those behind him correspondingly moved up a place in the ranking and Bösiger was now 10th.
Albacete (220 points) has retaken the lead in the overall standings with a slender three-points advantage over Kiss, followed by Hahn (209), Lacko (163), Bösiger (144), and Vršecký (136).
At the prizegiving for the teams it was Buggyra on the top step of the podium with Oxxo and Bernau second and third; following the revised result the Hungarian and German teams had to trade places.
Not all the prizes had been given out yet; there was still the ceremony for the winners of the TRO Challenge. This is a recognition for drivers who don’t figure among the Top 10 in the overall ranking. Körber was the winner here, with consolations for the Portuguese José Rodrigues (Renault) and tankpool24 Mercedes pilot André Kursim (GER).
Not surprisingly, there was much greater jubilation at this ceremony than at the FIA prizegiving — the three teams, Schwabentruck for Körber, Team 14 for Rodrigues, and tankpool24 for Kursim, had brought along a horde of rambunctious fans. 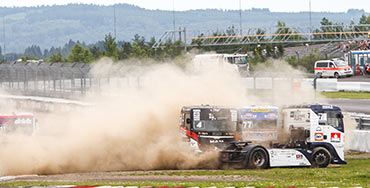 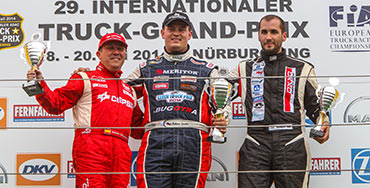