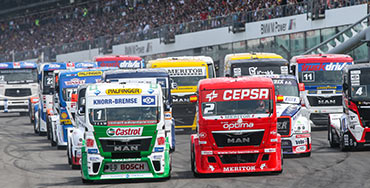 20. July 2014Nürburg - It wasn’t as summery as the day before, but the weathermen hadn’t got it right either. A partly cloudy sky, a pleasant 25°, a brisk breeze — ideal conditions for a great race. But we were in for a big surprise before the start. Kiss had been demoted five places on the grid for having obstructed Albacete during the SuperPole. And so Hahn inherited pole, an advantage the reigning champ made full capital of, taking the lead at the start and holding it all the way to the flag. Albacete attacked aggressively in the closing laps but lost out at the finish by a mere five-hundredths. Lacko behind them finished an easy third. Kiss meanwhile drove an extremely charged race, overtaking Bösiger at the start and then going at Vršecký. But the experienced Czech wasn’t letting the Hungarian heat get to him, successfully countering Kiss’s every move and crossing the finish line a tense eight-tenths ahead. Bösiger was sixth, ahead of Reinert. Major made sure he secured eighth place, and with it pole for the day’s second race. The last two finishers in the points were Körber and French MAN pilot Anthony Janiec.
Team Reinert Adventure (Hahn / Reinert) was the top-scoring outfit in this race, followed by Buggyra (Vršecký / Lacko) and Truck Sport Bernau (Albacete / Bösiger). 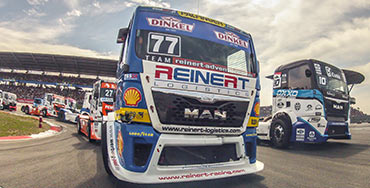 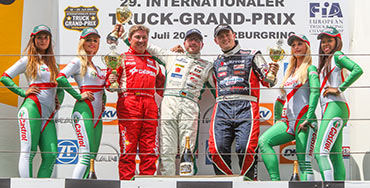