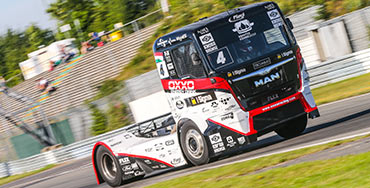 Sunday at the Nürburgring Part 1 - Kiss on pole

20. July 2014Nürburg - Early birds on a stroll through the deserted paddock and industry park at dawn, a good while before the day’s warm-up, came up on a scene of desolation — team tents and stands stripped of flags, emblems, and inflatables. Many were unaware that there had been a storm alert for last night, so the teams and exhibitors had not only fastened their tents more securely than they usually do but also removed everything they couldn’t batten down, including tables, tents, and exhibits. In the event the storm passed the Ring by, although it did drop a bit of rain over the circuit.
By the time the trucks and drivers were ready for the warm-up the paddock was once again the bustling place that truckrace fans are used to, a few puddles here and there the only sign that there had been a shower overnight.
The grandstand was bare for the warm-up, which started on the dot at 8 am. It had been a really long night, after all, with the concerts and grand fireworks display on the Müllenbachschleife. The track had by now dried almost completely, and yesterday’s protagonists – MAN drivers Antonio Albacete (ESP), Jochen Hahn (GER), Markus Bösiger (SUI), and Norbert Kiss (HUN) – lapped in almost the same times as the day before, although there was no real need for speed yet.
Even in qualifying three quarters of an hour later, all they needed to do was to make sure of a time that would put them in the Top 10 for the SuperPole. For most of the leaderboard, this meant doing just one lap flat out with a view to conserving their tyres for the races to follow. Albacete set the top time with 1:55.482s, and was rejoined in the pits by eight other drivers all confident of their places in the SuperPole — Kiss, Bösiger, Hahn, the Czech Adam Lacko (Buggyra Freightliner), the two MAN pilots René Reinert (GER) and Benedek Major (HUN), the second Buggyra driver David Vršecký (CZE), and German race-by-race pilot Gerd Körber (Iveco). Tenth place was hotly contested till the end, German MAN amazon Steffi Halm pipping Portuguese José Teodosio (Renault) by seven-hundredths.
In the SuperPole that followed most of the fastest times were set by the drivers on their first flying laps, and Kiss, once again, was the quickest of them all, six-hundredths ahead of Hahn. Albacete, Lacko, Vršecký, Bösiger, Reinert, Major, Körber, and Halm made up the rest of the first half of the grid for the first race. 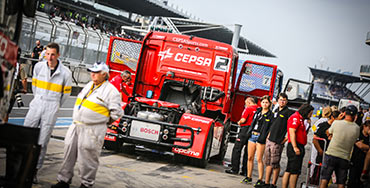 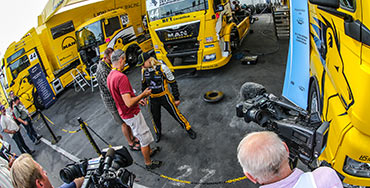