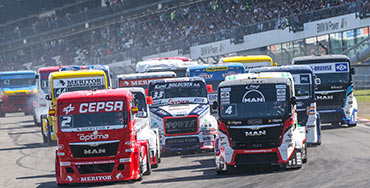 19. July 2014Nürburg - It was rise and shine for the truck racers a long while before 9 am on this, the first race day of the 5th round of the FIA European Truck Racing Championship at the Nürburgring, and the sun was ablaze as they lined up in the pit lane for the day’s warm-up. It was Norbert Kiss (HUN), Jochen Hahn (GER), and Antonio Albacete (ESP) again who set the pace — to a MAN, as we’ve come to expect.
Preceding the start of the first race the pit straight was thrown open for a grid walk by the public. Throngs of fans milled around the trucks lined up in formation, while the drivers did a one-lap parade around the Ring in the very truck in which Germany’s soccer world champions had celebrated their triumph in Berlin four days earlier.
Although it took a while for the crowds to disperse from the grid, the race nevertheless started on time. But it didn’t last for longer than a lap. A few hundred metres ahead of the startline, in the apex of curve at the Mercedes Arena, MAN pilots Benedek Major (HUN) and René Reinert (GER) collided heavily. The German’s blue truck swivelled, collecting Dutchman Cees Zandbergen’s “Rainbow Warrior” Scania.
Reinert’s badly damaged truck lay stranded half on the track, facing against the flow. It took another truck to break down for the red flag to fall. Then it was half an hour while the MAN in blue was salvaged and the track cleaned up. The restart, in the original qualifying order, was rather uneventful and after the first lap the field had, for the most part, fallen in line, taking the flag one after another.
Polesitter Albacete forged into the lead, followed by Kiss and Hahn, each a second apart. They were tailed by the Buggyra Freightliner duo, the Czechs Adam Lacko and David Vršecký, with Markus Bösiger (MAN) some distance behind.
So much for the first six places. Behind them it was a matter of which two drivers would head the grid for Race 2. As it happens, it’s an all German front row — Gerd Körber (Iveco) was followed home in eighth by Steffi Halm (MAN), who thus gets pole advantage going into the second race. The final two points-place finishers were Major and the Czech Frankie Vojtíšek (MAN).
Truck Sport Bernau (Albacete / Bösiger) was the top team, followed by OXXO (Kiss / Major) and Buggyra (Vršecký / Lacko).
After some delay it was announced that Major had been disqualified because of his collision with Reinert. This promoted Vojtíšek to ninth, the final point now going to Portuguese José Rodrigues (Renault). 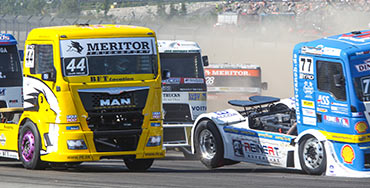 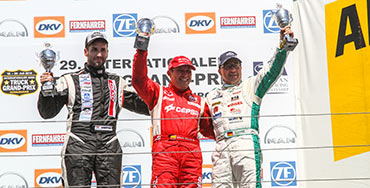 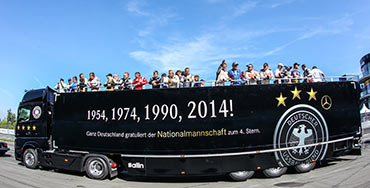