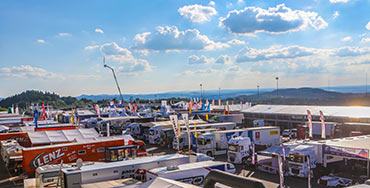 17. July 2014Nürburg - Most truck racing weekends in Europe are two-day events. A few do run over three days, but the Truck Grand Prix on the Nürburgring, the “Monaco Grand Prix” of European truck racing, takes all of four days.
None of the FIA pilots will miss this climactic event of the ETRC season for anything. This year there’s a 23-strong field including race-by-race Iveco pilots Gerd Körber (GER) and Markus Altenstrasser (AUT), and Dutchman Cees Zandbergen (Scania). These are about as many as the FIA races can accommodate.
All the other racers who want a part of the action at the TGP, and there are at least as many of those, will take part in the two races for the Mittelrhein Cup. This has been dominated for ages by racers from the British Isles, seeing as the race counts towards the British championship. The paddock consequently is a profusion of colourful liveries.
Every team does its best to put on a good show — at no other event on the calendar do they have to host so many sponsors and guests. For many of them it was down to work on Thursday morning itself, with the taxi rides for VIPs and the press. Hardcore truckrace fans are happy to pay top dollar for the chance to be driven around the circuit for a few laps by a championship racer in his or her truck. The demand is so high that tickets for this item on the agenda are always sold out at Christmas. Early in the morning there were already long queues of eager enthusiasts at the counters at which the regulation protective overalls were being issued.
The racers were eventually able to chauffeur some of the team guests too, till it was time for the obligatory one-hour free practice for drivers who’d made themselves available for the taxi rides. Even though the times here don’t count for anything, the three protagonists of this season, the MAN pilots Norbert Kiss (HUN), Antonio Albacete (ESP), and Jochen Hahn (GER), were once again fastest on the track.
Defending champ Hahn will do all he can at his home race to narrow the gap to Kiss and, indeed, even retake the leadership in the standings. The bantam from Altensteig has everything going for him — not least the moral support of thousands upon thousands of German fans.
It’s high summer here, and the weather’s going to stay that way through the weekend. As a result, we expect many visitors who decide to come only at the very last moment to boost the already exuberant atmosphere. 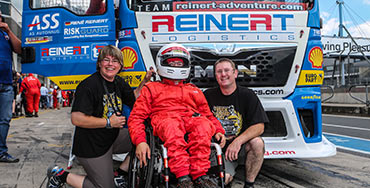 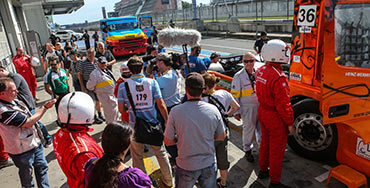 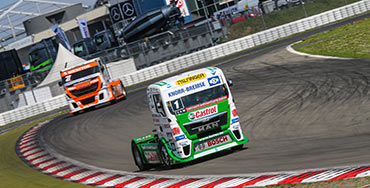