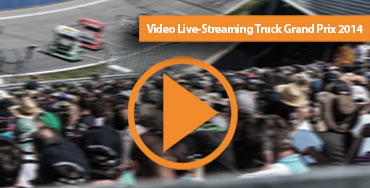 15. July 2014The FIA Truck Grand Prix on the Nürburgring, the highlight of the ETRC season, will be streamed live over the Internet. As they’ve been for the last few years, the FIA races and those for the Mittelrhein Cup this year too will be available for viewing in real time.
It was in 2006 that live commentary of the TGP by Jörg Hennig and Joachim Ebertz was first Webcast as an audio stream accompanied by a concurrently updated timescreen. A pioneering effort at the time.
Soon enough there were requests for live-streamed video.
This was accomplished in 2008, when the races from the Eifel were Webcast to the world live for the first time by means of the proprietary digital signage technology of digimago. This year too the organiser, ADAC Mittelrhein, has made sure all the essential prerequisites are in place.
The service is under the overall charge of the Truck Race Organisation (TRO), while the techies of digimago GmbH and bartscher.net are responsible for the execution. But none of this would have been possible without financial support from the following partners:

and sponsors Meritor and PE Automotive.

The TGP will be streamed live on the Websites of all the sponsors in addition to those of the TRO, truckracing.de / truckrace.info, and truckrace.tv.