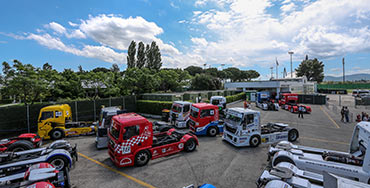 21 trucks for season-opener in Misano

13. May 2014We’ve now got the definitive entry list for the May 24/25 season-opening race of the FIA European Truck Racing Championship - there will be 21 starters at the Misano World Circuit on Italy’s Adriatic coast. The Number 20 Lion MAN of Spaniard Javier Mariezcurrena is the only truck missing from those on the FIA list, but instead we have race-by-race pilots Jérémy Robineau in an MAN and, foremost, “Mr Truckracing” Gerd Körber in his brand-new Iveco. The thrice-European champion from Rheinau may have been able to get some test kilometres on his truck, but he and his Schwabentruck team still don’t know where they stand. The first free practice sessions should give them (and us) some idea.
The MKR Renaults from the garages of Mario Kress are an unknown quantity this season. Englishman Chris Levett isn’t racing here, so it’s left to Europart Racing/Team 14 pilot José Rodrigues and his Portuguese compatriot José Teodosio to battle the seemingly all-powerful MANs. The two tankpool24 Mercedes drivers André Kursim (GER) and Dominique Orsini (FRA) too will only demonstrate in Misano for the first time how quick they really are.
The Buggyra Freightliners of Czechs David Vršecký and Adam Lacko have advanced a bit after extensive tests in Most, but the team isn’t revealing just how strong it believes it is. Even so, Vršecký should be able to hold a candle to the MAN triumvirate of Jochen Hahn (GER), Antonio Albacete (ESP), and Markus Bösiger (SUI). More than once last season he showed that he could take the fight to the frontrunners, and the fans will expect nothing less.
More than half the field, a good 12 trucks, will sport the lion emblem of Maschinenfabrik Augsburg-Nürnberg – MAN – in Misano. They will be joined by three Renaults, the two Mercedes, the two Freightliners, and a lone Scania driven by Dutchman Erwin Kleinnagelvoort, who belongs to the sport’s hard core.
Misano, a holiday town that’s at its idyllic best in May, has long been a favourite destination for German truckrace fans. With hotel rooms in abundance (it’s still off-season here, after all) and cheap flights to Bologna and Rimini, a short trip is well worth it. This time the occasion is going to be that little bit more special - almost a third of the field is of German origin. Besides Körber, Hahn, and Kursim the starting grid will also feature René Reinert and, foremost of all, the only two amazons in the FIA ETRC, Steffi Halm and Ellen Lohr (all three MAN). 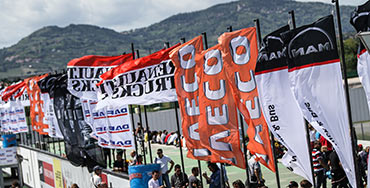 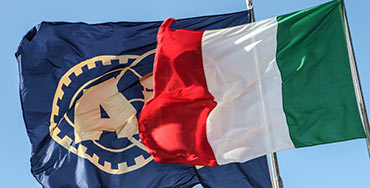 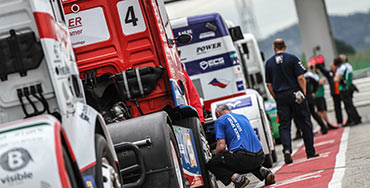