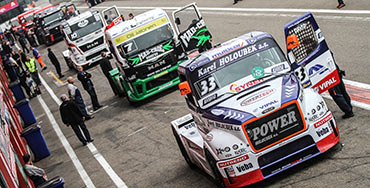 22. September 2013Zolder - A thick grey blanket of cloud hung over Circuit Zolder in Belgium as the truck racers took to the track for the second warm-up of this eighth round of the FIA European Truck Racing Championship. The action in Zolder starts only at 10 o’clock on Sunday after the service at the small chapel on the infield. It was now later than usual, but the asphalt still remained covered with a film of moisture. The truck racers weren’t going to let that worry them because the track was drying lap after lap, and so it surprised nobody that all recorded their best times only on their final laps. What was surprising, however, was that despite the less than optimal conditions the Czech Adam Lacko (MKR Renault), and the three MAN pilots Jochen Hahn (GER), Antonio Albacete (ESP), and Norbert Kiss (HUN) all managed times under 2 minutes.
It was certainly surprising for many spectators to see the No. 6 MKR Renault of Markus Bösiger (SUI) in action, especially those who’d witnessed the accident yesterday and seen the wreck recovered from the track. Most were absolutely convinced that what had been left of Bösiger’s Renault would be very difficult to rebuild into a race truck, and even if that were possible, only with an enormous amount of work — and lots of time. In actual fact the truck tearing round the track wasn’t yesterday’s wreck but a replacement that team boss Mario Kress had had brought in overnight from the Czech Republic. But this truck too wasn’t race-ready, and the MKR mechanics were up before 5 am, working on it as soon as it arrived at Circuit Zolder to get it up to race spec. The truck was ready in time for Bösiger to put it through a shakedown in the warm-up session.
The timed practice was a more focused affair. Even so, most of the top pilots, as is now their wont, drove only one fast lap before returning to the pits, to conserve their tyres. What they were aiming for was not to set the fastest time; making sure of being among the top 10 would suffice. Bösiger, however, used the time for an extended shakedown of the new Renault, and even Kiss kept going at it keenly. Both eventually drove quickest in their final laps, Kiss ending at the top of the timesheet and Bösiger fifth. The other qualifiers for the SuperPole were the Czech David Vršecký (Buggyra Freightliner), Hahn, Albacete, Bösiger, Lacko, and the four MAN pilots Mika Mäkinen (FIN), Markus Oestreich and René Reinert (both GER), and Jeremy Robineau (FRA).
In the shootout for the top 10 starting positions on the grid, Vršecký laid down his best time of the weekend with 1:57.666s in his very first lap. Hahn on the other hand had his time cancelled — having braked a little too late into the chicane, he had then cut across. The German pulled himself together, but could do no better than fourth behind Vršecký (whose time nobody could match), Oestreich, and Kiss, but ahead of Lacko, Albacete, Reinert, Bösiger, Mäkinen, and Robineau. 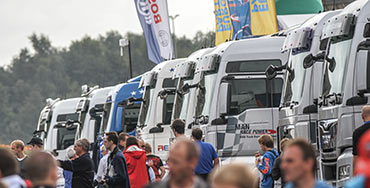 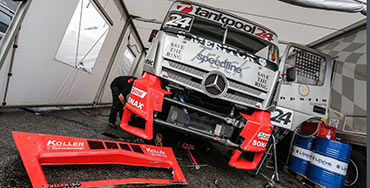