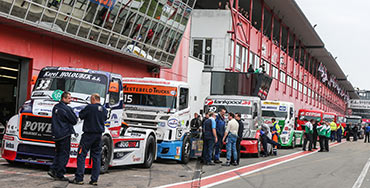 21. September 2013Zolder - At around 9 am, with the temperature still in single digits, it was time for the warm-up before qualifying for the first race of the eighth round of the FIA European Truck Racing Championship in Zolder. Ellen Lohr (GER), the only lady pilot in the field, and her 17 male colleagues appeared to have fully recovered from their exertions during the shoot yesterday evening when producer Peter von Saalfeld made them jog along the finish straight in full race regalia (with their helmets on). And though the track was slightly damp, title contenders Antonio Albacete (ESP) and Jochen Hahn (GER) both lapped in the 1:58s in their MANs — and it was only warm-up, mind you.
In the first timed practice, most of the top pilots drove back into the pits after two laps, only one of them a flying lap, to conserve their tyres. They were all fairly comfortable in the belief that they’d gone quick enough to make it into the Top 10 for the SuperPole. But then the Hungarian youngster Benedek Major (MAN), who was in 12th after four laps, suddenly shot up to fifth. In short order, MKR Renault pilot Adam Lacko (CZE) catapulted to second place in his fifth timed lap.
The track conditions appeared to have improved rapidly, and there was visible unease in the pits with Hahn and his compatriot and MAN colleague Markus Oestreich, two of the favourites, now only in eighth and ninth. Frenchmen Anthony Janiec (Renault) and Jeremy Robineau (MAN), and the MAN pilot René Reinert (GER), all potential candidates for the Top 10, were still out on the track, and should any of these three lap among the 10 fastest, neither Oestreich nor Hahn would have enough time left to respond. In the event, the two Germans’ luck held; there were no changes in the timesheet.
Buggyra Freightliner pilot David Vršecký was quickest with 1:58.615s, but barely quicker than Albacete had been in the warm-up. He was followed by Lacko, the Hungarian Norbert Kiss and the Finn Mika Mäkinen (both MAN), the Swiss Markus Bösiger (MKR Renault), Major, Albacete, Oestreich, Hahn, and MAN driver Frankie Vojtíšek (CZE).
Just before the SuperPole kicked off there was some irritation over the starting order, which is normally determined by the times from the preceding timed practice. And then there was a 10-minute delay to allow for the stalled Renault of the Belgian Jean-Pierre Blaise to be removed from the track.
But then the countdown began, and Kiss blazed to pole with 1:57.369s in his very first flying lap. He was followed very closely by Albacete, Lacko, Hahn, and Vršecký, only four-tenths covering this group of five. The situation was explosive — and after a slow lap, all once again set off on their final assault, firing peak pressure on all cylinders. At the end, there were a couple of changes — Hahn had shot into second, displacing Albacete, who was followed by Oestreich, Lacko, Vršecký, Bösiger, Mäkinen, Major, and Vojtíšek. Only 45-hundredths of a second separated Kiss from Vršecký, showing once again how close it’s getting at the top. 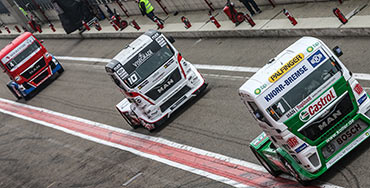 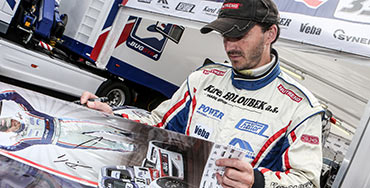