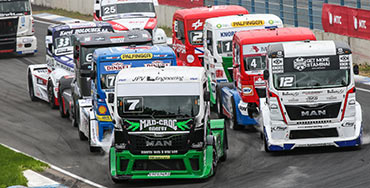 Sunday at the Smolenskring – Part 3

28. July 2013Smolenskring - Following the delayed conclusion of Sunday’s first race at the Smolenskring, the final race began 40 minutes late. The first row of the grid was occupied by polesitter Mäkinen and Major, both of whom have demonstrated – Mäkinen in Misano and Major in Nogaro – that they can well contain, and indeed win against, quicker competition if they start from the front. But they’ve also experienced how, in such situations, one can equally be relegated to the rear of the field. The start, though, went off smoothly for both MAN pilots, Mäkinen coming out ahead in the duel against Major. Behind them the rest of the field followed like a train, each in his starting order. But if you expected the leading duo to be hunted down by their nominally quicker pursuers, that just wasn’t happening - Mäkinen and Major actually pulled out a gap on the rest of the field. The losers in this early stage were Bösiger and Reinert. While Oestreich, Hahn, Vršecký, and Albacete closed ranks behind the leaders, the Swiss and the German fell back somewhat. At the finish the quartet had caught right up and Mäkinen only managed his escape to victory by a second and a half, Major meanwhile holding out against Oestreich by a mere second. Oese, for his part, had the rest of the pack right on his tail, the individual racers separated by intervals of fractions of a second. At the end the race was far closer than it appeared. Following Bösiger und Reinert in seventh and eighth, Egorov and Fernandes once again took the last remaining points.
Albacete was the highest points-scorer of the day. With 255, he has extended his lead over Hahn (238) in the drivers’ standings. Oestreich is third with 197, followed by Vršecký (185), Kiss (175), Lacko (126), and Bösiger (117).
The team title after Sunday’s first race went once again to Truck Sport Lutz Bernau (Albacete / Oestreich), ahead of Castrol Team Hahn Racing (Hahn / Mäkinen) and MKR Technology (Lacko / Bösiger). In the second race it was Hahn ahead of Bernau and OXXO Energy Truck Race Team (Kiss / Major).
At the close there was a very special ceremony to honour Jose Fernandes Teodosio (whom everybody calls simply Jose Fernandes). This season is the first in the FIA ETRC for the Portuguese Renault pilot who till last year had only ever raced in the French national championship and who felt obliged to make it to the start Russia despite having by far the longest journey to get here. He was duly rewarded for his participation at the Smolenskring with his first two championship points. 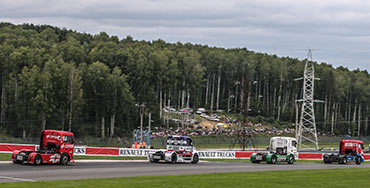 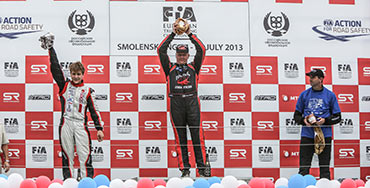