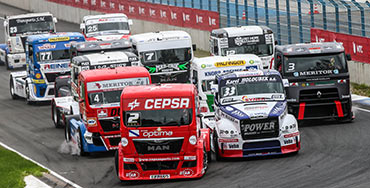 28. July 2013Smolenskring - The tale of Sunday’s first race is simply told — there were in fact two races. Polesitter Albacete took the lead at the start, but he had Vršecký up alongside on the outside line and Oese directly behind. And it looked like Oese could move past the Czech in the first curve. But Vršecký carried greater momentum through the curve and slotted in ahead of Oestreich, who was followed in turn by Hahn, Kiss, Lacko, and Bösiger. Barring any further events, the finishing order was already decided — or so it appeared. But then, at the start of the fourth lap, going into the “hazard” curve that follows the finish straight, a spring on Lacko’s truck broke and the Renault, impossible to control, smashed broadside into Kiss’s MAN, sending both skidding off the track into the gravel. Bösiger and the drivers following him were able to avoid the smash-up, but the race had to be interrupted. Both trucks were severely damaged, and it took a good half-hour for the salvage to be completed before the trucks could restart 10 minutes thereafter. The start took place under yellow flags because the track crew had not been able to clean the track entirely of the oil that had spilt from the crash. The starting order was identical to the original one, only without Lacko and Kiss. Albacete once again took the lead, ahead of Vršecký and Oestreich. But this time everybody was driving gingerly, and the only provocation, if one may call it that, was a rather rude overtaking manoeuvre by Hahn. In one of the many tight 180° curves he dove inside Oestreich, forcing Oese’s MAN wide. The man from Fulda not only lost third place to Hahn, but also had to let Bösiger past. At the end Oese was happy that he could finish fifth ahead of Reinert and Major. Mäkinen took eighth place and, with it, pole position for the last race of the weekend. There were only 10 trucks at the (re)start, so the Russian Iiuri Egorov (Buggyra Freightliner) and the Portuguese Jose Fernandes (Renault) could win their first points. 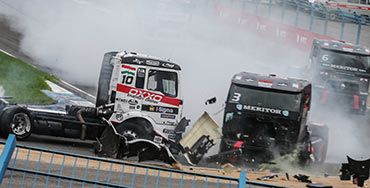 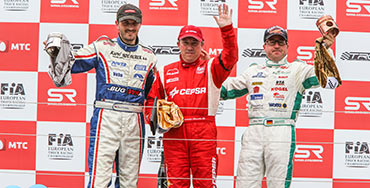